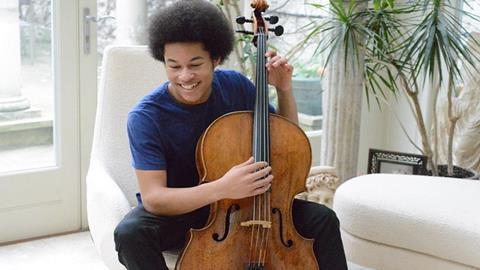 The instrument was originally loaned to the 17-year-old for his performance in the final of the BBC contest at London's Barbican and for his Royal Festival Hall debut earlier this year through Florian Leonhard Fine Violins. The dealership has now facilitated the permanent arrangement 'with the help of a generous anonymous sponsor based in London.'

'I immediately fell in love with this cello in the Spring and I am thrilled,' said Kanneh-Mason. 'The cello has been bought and is on loan to me from a private collection. I can hardly believe that I can continue to develop my relationship with this cello, making the sound more completely my own over time. This is a cello that will grow with me and respond to what I need to express.'

In November the young British cellist signed a major new record deal with Decca Classics after becoming the first black musician to win the BBC Young Musician competition in its 38-year history.