Wright: Violin Concerto (‘And then there was silence…’)*, Momentum*. Vaughan Williams: Symphony no.5 in D major† 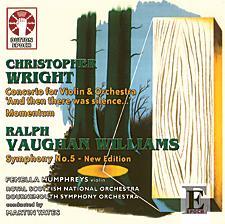 Composed in memory of his violinist wife Ruth, who died of cancer in 2009, Christopher Wright’s Violin Concerto is a deeply personal utterance. Its creative surge and invention prove Wright’s exceptional talent, as previously enshrined in a Dutton collection of his string and orchestral music. Imagine the soaring, bittersweet lyricism of Walton’s Concerto grafted on to the haunting reflectiveness of Finzi and you won’t be too far away from the Concerto’s distinctive idiom.

Fenella Humphreys, currently concertmaster of the Deutsche Kammerakademie and violinist with the Lawson Trio, captures the music’s wistful cantabile to perfection, producing a golden tone in all registers with the utmost sensitivity to where every phrase is moving. Her violin entwines with the glowing textures of the Royal Scottish National Orchestra under the expert guidance of MartinuYates to alluring effect.

Exemplary engineering and couplings – Wright’s arresting Momentum and a critically revised edition of Vaughan Williams’s Fifth Symphony from the Bournemouth Symphony Orchestra – round out an outstanding release.