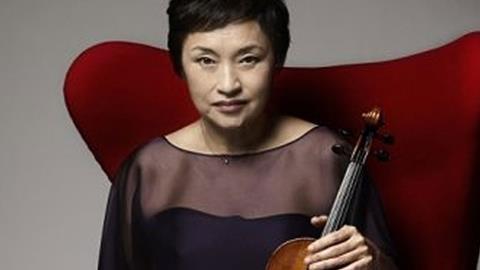 Kyung Wha Chung has been forced to postpone her 2016 UK tour until next spring due to a swollen finger ligament. The 68-year-old Korean violinist, who was due to play Bach's complete Solo Violin Sonatas and Partitas at London's Barbican on 26 October, has rescheduled her performance to 10 May 2017.

According to Chung's website, she is also due to perform solo Bach in the Chinese cities of Suzhou, Wuxi, Kunshan, Guangzhou, Shanghai, Shenyang, Zhongshan and Xiamen, and in Seoul, Gyeongju and Yeosu in South Korea over several months beginning at the end of October - there is currently no word as to whether these performances will be affected.

Earlier this year Chung signed an exclusive three-album recording contract with Warner Classics, the first of which, featuring Bach’s complete solo works for violin, will be released in October. The virtuoso also opened the Verbier Festival on 22 July 2016 with a performance of Brahms’s Violin Concerto.

She returned to the UK for the first time in twelve years to give two comeback recitals in 2014 at St George’s Hall Concert Room in Liverpool and at London’s Royal Festival Hall – where she made her UK debut in 1970.

Kyung Wha Chung was interviewed in The Strad’s December 2014 issue about her long-awaited return to the London concert stage and her advice for the next generation of artists – download on desktop computer or through The Strad App.