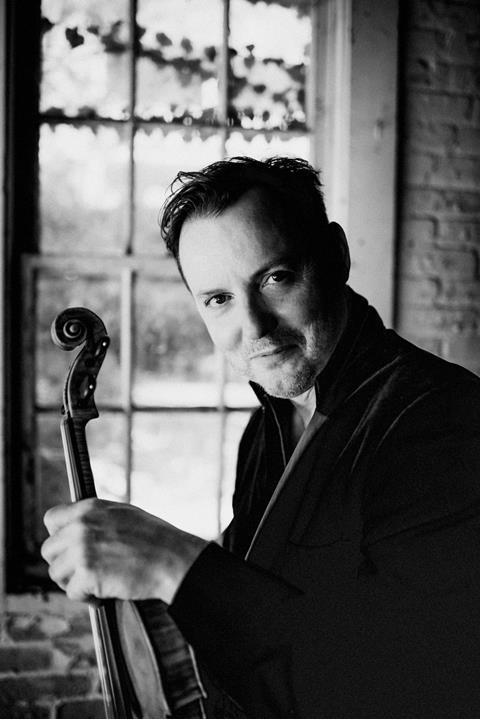 Everything was going well until my forties.

My career as a concert violinist started after winning the 1992 Yehudi Menuhin Trust Award in Paris. I trained at the Conservatoire National Supérieur de Musique de Paris, the Juilliard School and Temple University. I was enjoying a fulfilling career, dividing my professional activities between teaching at the university level and playing concerts in Europe, the United States, Asia and Brazil.

Everything changed when I was diagnosed with focal dystonia. Focal dystonia is a neurological disorder that causes different parts of the body to move in an involuntary and uncontrollable fashion. Symptoms can be mild to severe, often forcing the majority of musicians to give up performing.

What causes dystonia is not clear. Characteristics that many musicians share, such as intense training, stress, hyperactivity, changing instruments, Type A personality, are potential triggers. Treatment options can conflict with the physiological aspect of performing. What is clear is that recovering from dystonia requires starting over and implementing a new set of values, reference points and tools.

For me, it all began when, after a particular heavy concert schedule, performing back-to-back recitals at the National Gallery in Washington DC, the Théâtre Impérial in Compiègne, and the Liszt Academy in Budapest, I began noticing that my left ‘fourth’ finger was collapsing occasionally on the finger board when not in use. Attributing this to fatigue or tension, I continued performing, ignoring or pushing through the unreliable pinky for another two years, often re-fingering my scores to avoid using certain finger patterns. Eventually the tension in my left fingers was such that my entire left hand stopped cooperating. It was time to confront the issue head on and stop performing to concentrate on healing and rehabilitating. However, dystonia is more than a physical malady.

How was I going to address an issue which would most likely result in my being viewed ’differently’ by the musical community, including my colleagues, students, concerts promoters and organisers? Keeping dystonia a secret remains a very understandable, but unhealthy option. Musicians are judged and appreciated for their performing and recording output. First as students, then as performers, we attribute our sense of worth to our playing. If you cannot perform, what happens to your sense of worth as a musician? Our musical and academic environement can be very unforgiving. So, like many, I kept my dystonia a secret for many years—obsessing over my condition while maintaining a full academic and guest masterclasses schedule.

Read: How I went about relearning to play the violin with two fingers

At first, I did seek medical advice. The doctors and therapists I met with, ranging from hypnotists, physical and massage therapists, chiropractors, neurologist to dystonia specialists, represented the full gamut of approaches: from the blunt ’get some Botox injections’ to ’learn a new instrument or change careers.’ A few would add the suggestion to address all dysfunctions in ones life.

I needed a new set of eyes and ears during the rehabilitation process. Peeling back the layers of tension that had crept into my playing and identifying the exact location points were the first steps towards recovery. Tension is perhaps the most insidious issue we deal with as musicians: it can move to different physical areas and increase over the years, becoming part of our technique and even mind-set. Understanding that each action required for playing an instrument originates in a specific physical location and involves a set of specific physical actions is key to dissociating mind-body tension or eradicating it. For me this is the only way to develop what I call an efficient, effective and effortless technique.

Through training or uninformed practice, we often have a vague notion of the exact set of physical actions needed to produce a particular stroke, string crossings, shifts or even vibrato. Teachers often contribute to this lack of awareness by mislabeling physical actions. ’Moving the wrist’ will not facilitate string crossings but a loose wrist will allow the hand to move freely from one string to another. ’Sliding the finger up or down’ to a new position will not work if a student is not made aware that it is the elbow or shoulder that allow the entire arm with the fingers to shift properly to a new position. Reflecting on my own training, the forceful hammering of my left fingers onto the finger board reinforced erroneously in my brain the importance of the fingertip. For years, I thought the finger was responsible for everything, from the note, intonation, vibrato to even shifting – while in fact, the fingertip is only the connecting agent between the back, shoulder, arm, hand, and the string.

My own discoveries would help for a while - tweaking my violin set-up (customising chin and shoulder rests, shaving the neck of my violin neck), subtle posture and hand adjustments. This helped increase self-awareness but did not lead to a clear path to recovery. The decisive turning point was meeting and working with therapist and researcher Philippe Chamagne at the Clinique du Musicien in Paris, and later on with guitarist, David Leisner, whom I had met at a conference on Dystonia in New York City. Working with them separately over the course of two years, I started implementing some of their concepts. Gaining a clear understanding of their principles allowed me to adapt them to my own playing later on, paving a clear path to recovery.

Invaluable clues and a new insight came in reassessing my relationship to the violin, my early training at the Paris conservatory and the Juilliard School, my technique, general posture and overall playing. My tyrannical and temperamental French violin teacher not only equipped me with a very solid technique, but he also instilled in me a feeling of inadequacy and an appetite for grueling practice sessions. My technique may have pushed me far enough toward a successful career, but I had never fully developed a clear understanding of the mind/body/instrument connection. I prized myself as a very passionate player, but that passionate energy also disguised a hefty dose of tension and misused power. My left fingers provided an accuracy of pitch that was lauded by music critics, but years of hammering down with unnecessary force the fingers on the fingerboard took a toll. I had developed a technique that filled me with a sense of accomplishment, but years relentlessly spent pushing myself contributed to this physical burnout.

Remembering and understanding the reasons that initially caused my pinky to drop and the subsequent dysfunctions created in my left hand (the second finger lifting back too far, the diminished space between the second and the ring fingers, spastic tension between the violin neck and the thumb) were also keys to the rehabilitation process. Applying my mentors’ principles, I began relying on the action of larger muscle groups – the back and scapula supporting and freeing the arm, the arm swing supported by the entire shoulder joint propels the fingers articulation and the hand during a shift, the proper rotation of the arm maintaining hand freedom in high positions. I adopted the concept to my left hand with what I call ’the cathedral’s pillar principle’- the finger’s base joint is responsible for creating strength and stability, while releasing unnecessary tension in the third joint and fingertip. This basic principle has allowed me to develop a more stable hand position, a looser thumb, a freer vibrato, a lighter left-hand technique, and it has helped recreating the natural space between the second and third fingers while preventing my hand from tensing up.

Implementing a new set of motor skills increased consistency and sense of confidence, I was able to resume performing in 2014. Sharing my story and turning this setback into an enriching and positive experience has been a blessing. My recovery process not only enriched my playing and musicianship in incommensurable ways, but it also transformed the kind of teacher I was into a teacher committed first and foremost to developing physiological, mental and musical well-being in my students.

Dr. Bernard Zinck is associate professor of violin and chamber music at University of Wisconsin-Milwaukee and artistic director of Lakeside Chamber Music

Read: Violinist Heime Müller on his search to cure his focal dystonia