Less than four months before his death, the veteran concertmaster spoke to Heather Kurzbauer about his long career at the forefront of Dutch classical music 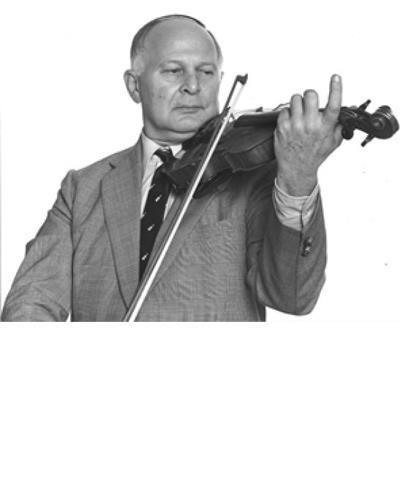 Blessed with a sharp wit, keen insight and impeccable manners, Theo Olof was a delightful Renaissance man. As I spoke to him at his pleasant abode in the outskirts of his beloved Amsterdam on 21 June (the day his ‘musical twin’, Herman Krebbers was born), I found that the chance to reminisce brought forth a treasure trove of memories, all thoughtfully couched in elegant prose. Blessed with an inquisitive mind, Theo Olof proved his enthusiasm for all things musical has not diminished over the decades.

Born in Bonn in 1924, Olof saw his early childhood permeated by the glories of German cultural life. Yet glory turned to vicissitude after the Nazis came to power. The nine-year-old Olof, accompanied by his violinist mother, fled to Amsterdam in 1933. Arriving with a multitude of refugees, the young prodigy had his first encounter with Lady Luck thanks to a perceptive local volunteer. He was taken to the legendary Viennese-born pedagogue Oskar Back: ‘My introduction to 30 years of inspiration.’ Back had a penchant for Šev?ík exercises and the metronome. Yet beyond the strict application of metre and method, Back was well versed in the expansive musical styles of his former master, Eugène Ysaÿe. ‘Back had a fantastic brain for teaching,’ Olof recalled. ‘He always knew just what a student’s weak points were and how to work on them. It was a bit irritating that he always seemed to know whether a student was prepared – even before a single note was played. We used to think it had something to do with the way we rang his bell. If a piece was not properly prepared, I would have to return to his home for a repeat performance that very same evening.’ Along with his treasured Šev?ík, Back advocated a broad repertoire reaching far beyond virtuosic pieces and concertos. He encouraged the young Olof to expand his horizons by performing sonatas, chamber music and orchestral repertoire.

Olof’s first taste of the joys of collective music making took place at Amsterdam’s posh Grand Hotel Krasnapolsky where the young Theo and his mother played in performances of Carl Zeller’s operetta, Der Vogelhändler. Olof could hardly contain his delight as he thought back: ‘It was such a special encounter, to rehearse with so many people at once and hear so many different instrumental sounds and colours.’ Portentous remarks from one of the world’s great concertmasters!

Thanks to Back’s generosity in sharing his considerable network of contacts and concerts, his star students enjoyed busy concert schedules. ‘You cannot imagine how pleasurable and instructive this was,’ he said. ‘Many of the orchestral musicians went out of their way to offer me guidance, and even gave me small presents. The only problem was the government police inspector, who doled out fines for “child labour” after most performances!’ Back’s indelible influence also nurtured the friendship between his two most talented pupils, Herman Krebbers and Theo Olof: ‘It all began when we were assigned to master the Bach ‘Double’ from memory. I think we may have performed over a thousand times together since then.’ Leading composers including Henk Badings, Géza Frid and Wilhelm Rettich wrote concertos for them, and as the affable Olof pointed out: ‘We even managed to get married at more or less the same time.’

The havoc created by the Nazi invasion of the Netherlands is no subject for sunny-day interviews. Oskar Back was forced to endure ludicrous interrogations before a fake non-Aryan identity was fabricated. Olof narrowly escaped deportation and was forced underground. Brussels became his safe haven: his name was changed, his violin career halted. A prolific writer with several Dutch books to his credit, Olof wove his wartime impressions into a tribute to the troubled Russian genius in a compelling volume entitled My Life with Tchaikovsky.

The year 1951 was remarkable for Olof, who not only took fourth prize at the Queen Elisabeth Competition but joined Herman Krebbers to share ‘the finest seat in the house’ at the Hague Philharmonic. Commenting on the challenges of switching from soloist to orchestral leader, Olof underscored the importance of learning to blend in with other musical personalities. The concertmaster operates in ‘the best of all musical worlds’ as a musical spokesman between conductor, composer and fellow musicians.

The Hague Philharmonic was sociable and relaxed, a bit undisciplined compared with Olof’s future home orchestra, the Royal Concertgebouw. ‘Convincing less fanatical colleagues to work hard in sectionals was quite a challenge at the outset,’ he recalled. Olof and Krebber’s regime paid off: the Hague Philharmonic reached new heights of excellence in the late 1950s, with splendid performances at the Holland Festival, a long list of world premieres, international tours and a recording contract with Philips. A champion of contemporary music, Olof added the Hans Henkemans and Bruno Maderna violin concertos to his commendable repertoire list during that period.

Many great conductors passed muster as Olof waxed eloquent on the legends of the past. ‘For me, first and foremost, the grandest of the maestros was Carlo Maria Giulini,’ he said. ‘Such a refined gentleman, such wonderful taste and such an exquisite stick technique that put gesture into encouragement, so that we could perform with a mixture of reverence and passion.’

And then there was Otto Klemperer, feared by many an orchestral musician for his autocratic manner and ultra-perfectionism. Olof, however, relished the fact that the idiosyncratic maestro could show another side to his complex personality: ‘We once met by chance in the centre of Amsterdam, the stern maestro walking arm in arm with his lovely daughter, Lotte. He peered down at me before asking whether I would join them for an ice cream. And then there was the time that I was woken up by the telephone in the middle of the night – Klemperer needed to ascertain then and there if I would accept the position of concertmaster with the Philharmonia Orchestra (London).’

Although Olof was to receive many offers to leave the Netherlands, including the temptation to lead Eugene Ormandy’s Philadelphia Orchestra, he relished the free time built in to his shared concertmaster positions. ‘And of course the orchestra had the luxury to work in Concertgebouw Hall, a wonderful instrument that is especially kind to orchestras who can play pianissimo.’ Teaching, coaching, commissioning new works and running masterclasses for orchestral string players to work on excerpts were all part of Olof’s magical mix of musical activity. A founder of the Dutch national violin competition in 1967, aptly named the Oskar Back Competition, he was tireless in developing new venues, new repertoire and new opportunities for future generations. In the late 1970s, the ever-inquisitive Olof rediscovered the luthéal, a mechanically altered piano used in the original scoring of Ravel’s Tzigane. Olof did not rest until he performed and recorded the piece with luthéal.