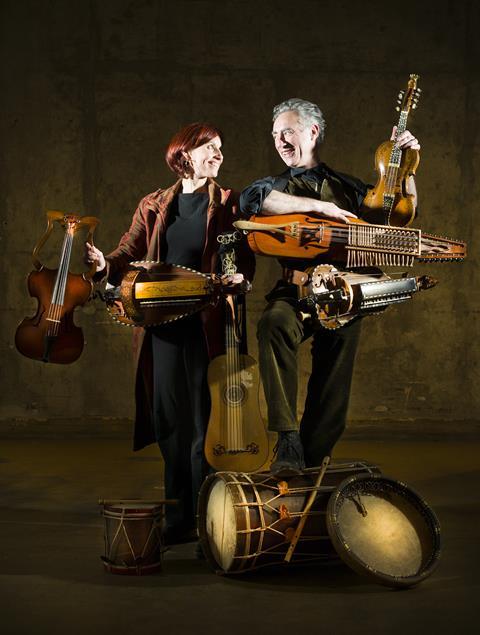 The Society of Strange and Ancient Instruments will celebrate the antics of the 16th-century Shakespearean actor Will Kemp this month when it recreates his famous nine-day dance from London to Norwich with a programme of music performed on contemporary instruments - including reconstructions of rare and obsolete bowed stringed instruments.

The project, called Nine Daies Wonder after Kemp's own account of his journey, will involve the Society's musicians performing alongside dancer Steven Player in a programme of songs, instrumental music and dance dating from Elizabethan times. It will receive its inaugural outing as part of a residency at the Aldeburgh Music festival from 13-19 January before going on tour throughout 2014 and 2015.

The Society's founder and director Clare Salaman (pictured with Steven Player) and fellow string player Alison McGillivray will perform on an assortment of bowed stringed instruments in circulation during the time of Kemp. These include the lyra d'amore (or viola bastarda), which Salaman describes as 'a tenor viol with sympathetic strings that can play bass lines, melodies and chords and has a wonderful ethereal quality', and the nyckelharpa - 'a keyed fiddle with twelve sympathetic strings, creating a sound that is 'still' - the result of the keys being stopped by tangents rather than fingers, giving it a viol-like quality.'

'All these instruments as well as many other unusual instruments included in this project are mentioned in German music theorist Michael Praetorius's Syntagma Musicum, published in 1614, although they may not have been in common use,' said Salaman. 'Some instruments, such as the nyckelharpa and viola bastarda, have hardly been used to explore this repertoire so we are recreating sounds that might be quite close to those heard back then.'

A reconstruction of a lyra d'amore, which was in circulation during the late 16th- and early 17th-centuries, has been made for McGillivray based on a contemporary description of the instrument, while keyed fiddles like the nyckelharpa have existed throughout Europe from the 12th century or earlier:

'The lyra d'amore fell out of circulation during the baroque era along with other instruments from the viol family, and Alison is one of very few people who own and play the instrument today, popular though it was in the 17th century,' said Salaman. 'There are existing published works from the 17th century for a similar instrument, the lyra viol, including a volume of tunes arranged for the instrument by John Playford, called A Musicall Banquet. We are breaking new ground by reintroducing this viol with sympathetic strings to the repertoire of the turn of the 17th century.'

Keyed fiddles are similarly rare, according to Salaman, who said only a handful of players use them for classical repertoire today:

'Keyed fiddles had disappeared in Europe by the 18th century. It's hard to say if they ever had much of a foothold after medieval times but in the last few hundred years they have flourished in Scandinavia (specifically Sweden, where it is the national instrument) and are virtually unknown elsewhere. Renaissance music has hardly been explored with them.'

William Kemp, or Kempe (c.1560-c.1603), was a famous clown of the Elizabethan era and a leading actor in the Lord Chamberlain's Men, the company with which Shakespeare was most associated. In 1600 he danced his way from London to Norwich in nine days, entertaining the public along the way.

'Will Kemp's journey gives us the opportunity to explore music from right across Elizabethan society, from wild country dances to refined instrumental music and art songs,' said Salaman. 'Dance and music 400 years ago were utterly integrated: much of the existing secular music repertoire is based on dance forms, even some songs. Our approach will be similar to that of our Elizabethan ancestors: use the instruments to hand and make music that is alive and spontaneous and include plenty of improvisation.'

A recording of Nine Daies Wonder will be released in April. Clare Salaman will present a programme on the nyckelharpa on BBC Radio 3's Early Music Show on 2 March.

View our Gallery for photographs and descriptions of the bowed stringed instruments used in Nine Daies Wonder.