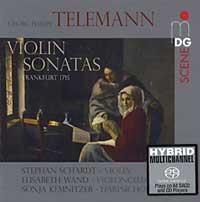 Stephan Schardt and his colleagues give accomplished accounts of Telemann’s six Frankfurt sonatas, exposing the varied elements of the composer’s mixed style with flair and virtuosity. Schardt uses only French ornaments in the Cantabile of no.3 and the Sarabande of no.6 and introduces double-like repeats in the Allemandes of nos.5 and 6. He also communicates contrapuntal dialogue well (for example, the two-part texture of no.2’s Allemanda) and adds further Italianate decoration to already ornate violin lines, embellishing and contrasting repeated sections imaginatively. His alert colleagues imitate some of his additions when musically appropriate, as in the Adagio of no.4. Throughout, quick movements are spirited, crisply articulated and supported by nimble accompaniments, particularly the Polish final Allegro of no.4, and the melodies of the slow movements are lyrically conveyed. The well-balanced recording has a pleasing bloom.

Negative aspects include a brief intonation issue (bar 55 of no.2’s Gigue, first time), the use of an unlikely quasi-flying staccato bowing in the repeated section of no.3’s Allegro assai, and the choice of filler – the Ouverture from Telemann’s Der getreue Music-Meister. In the latter, the attempt to compensate for the lack of orchestral colours by varying the harpsichord registration and introducing additional dynamic contrasts fails fully to convince.