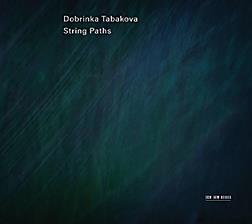 Pärt mixed with Kancheli, plus a bit of Górecki and a dash of mystical Vaughan Williams: even on a first hearing, the music of young Bulgarian-born and London-educated composer Dobrinka Tabakova sounds reassuringly familiar. It’s no less fresh and compelling for that, though. Her glowing tonal harmonies and grand, sweeping gestures convey a huge emotional depth that gives the pieces here immediate appeal. And it would be hard to better the passionately committed performances of her music given by the starry line-up of players on this remarkable disc.

The high point is Kristina Blaumane’s astonishingly powerful performance of Tabakova’s 2008 Cello Concerto, an account of such intensity that it’s quite draining to listen to. From the first movement’s pounding, urgent chords to the glassy harmonics of the fragile third movement, Blaumane maintains a rich, radiant sound with beautifully sculpted phrases, and the Lithuanian Chamber Orchestra gives fervent support.

Blaumane is joined by Roman Mints and Maxim Rysanov in a searing performance of the rich-textured string trio Insight, and the string septet Such different paths is played with wit and verve by an ensemble including Janine Jansen, Amihai Grosz and Torleif Thedéen. A homage to Rameau, the Suite in Old Style sometimes strays a little too close to out-and-out pastiche, but Rysanov plays the solo viola part with enormous vigour and a dark lyricism.

From start to finish, it’s hard not to be swept up in the abundant power of Tabakova’s music – matched in a recorded sound that’s warm and clear.