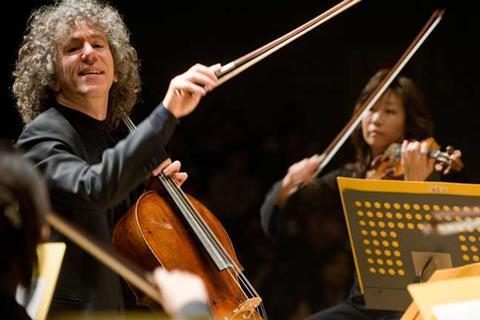 Steven Isserlis was born into a musical family in London, 1958. From 1976 to 1978 Isserlis studied at the Oberlin Conservatory of Music with Richard Kapuscinski and has cited Daniil Shafran, who he first met when interviewing the Russian cellist for The Strad in 1987, as a major influence on his playing. As a concerto soloist he appears regularly with the world’s leading orchestras and conductors. Recent engagements have included performances with the Berlin Philharmonic, Budapest Festival, Philharmonia, Cleveland, Minnesota, Zurich Tonhalle and NHK Symphony Orchestras. As a chamber musician he has curated series for many of the world’s most famous festivals and venues, including the Wigmore Hall, the 92nd St Y in New York, and the festivals of Salzburg and Verbier. Isserlis is a staunch advocate of lesser-known composers and of greater access to music for younger audiences. He is also committed to authentic performance and frequently performs with the foremost period instrument orchestras. He gives most of his concerts on the Marquis de Corberon (Nelsova) Stradivarius of 1726.