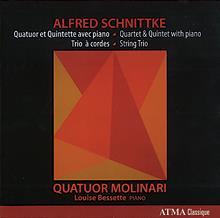 
When Schnittke composed his Piano Quintet between 1972 and 1976, the deaths of his mother and of his friend Shostakovich weighed heavily on his mind. It is therefore a work racked with pain and emotional emaciation – the sardonic waltz of the second movement provides the only moment where the inherent gloom is lifted. As in their previous Schnittke disc (reviewed January 2012), the Canadian Molinari Quartet and friends emphasise the composer’s more lyrical qualities, and compared with the heavily laden intensity of the Keller Quartet (ECM), the players warm the cold chill that blows through much of the score. Yet in the finale’s transfigurations of music that has gone before, they produce a contorted bitterness that is more disturbing than in any rival recording.

The Piano Quartet, written twelve years later, is a more overtly atonal and brutal score, with hard-hitting tone clusters from the piano and acerbic string writing. Louise Bessette’s piano playing provides the steely quality on which the work thrives.

The String Trio, his 1985 tribute to Anton Webern, flits between tonality and atonality and makes plenty of use of pastiche. The interplay between instruments is perfectly judged here, and, as throughout the disc, the string intonation is exemplary. A relatively close and dry recording ideally balances the instruments.