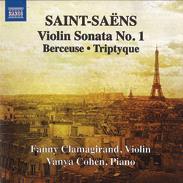 The mellifluous ease and radiant lyricism of Saint-Saëns’s D minor Violin Sonata was captured with such impassioned precision by Jascha Heifetz that for many years he seemed virtually to define what this music is all about. Subsequent recordings by Philippe Graffin (Hyperion) and Olivier Charlier (Warner) revealed a more distinctly French sense of tonal colour, and now Fanny Clamagirand and Vanya Cohen have taken the process one stage further. Playing with a Romantic sense of fantasy (especially in the Adagio slow movement) they reveal layers of enchantment and nobility that the high-powered Heifetz, for all his consummate artistry, barely hints at. Performed like this, with beguiling warmth and seductively phrased affection, one can almost sense Brahms in autumnal mood casting a nostalgic eye over the proceedings.

Clamagirand’s gloriously rounded, gently cushioned sound and special sensitivity to the Frenchman’s rarefied sound world (familiar from her previous recording of the concertos for Naxos), proves equally persuasive in the various miniature items. These include the ravishing Romance op.37 and Berceuse op.38, played here with captivating intimacy, the two élégies opp.143 and 160, the delightful Sarabande et rigaudon op.93, and the late Triptyque op.136. Complemented by exemplary engineering, this fine release should win this glorious music many new friends.