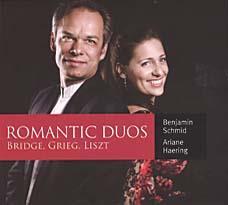 Benjamin Schmid and Ariane Haering are a formidable pairing who live and breathe these scores as one, matching even the most subtle of dynamic and phrasal inflections to a remarkable degree. In Liszt’s Grand duo concertant, Schmid’s captivating range of sonorities is matched throughout by Haering’s golden touch – her gently rippling asides in the second variation ravish the ear, while in the notorious tarantella fourth variation and marziale finale, both artists infectiously convey their shared delight in the music’s exuberant invention. No less striking is Nathan Milstein’s fine transcription of Liszt’s Consolation no.3, which sounds as if it were a fresh musical discovery in this meticulously balanced recording.

This fine duo’s ability to draw the listener in as though they are sharing private confidences reaches its apex in Bridge’s 1904 Sonata, Romanze and Heart’s Ease, all of which possess such heightened sensitivity to harmonic inflection and musical line that one senses a Delian impulse colouring the music’s distinctive chromaticism more strongly than usual. Perhaps a more free-flowing, heroically rhetorical approach to Grieg’s popular C minor Sonata might have paid even greater dividends, but with playing as disarmingly poetic as this, it is difficult not to be seduced into the pair’s exquisite sound world whatever one’s preconceptions.