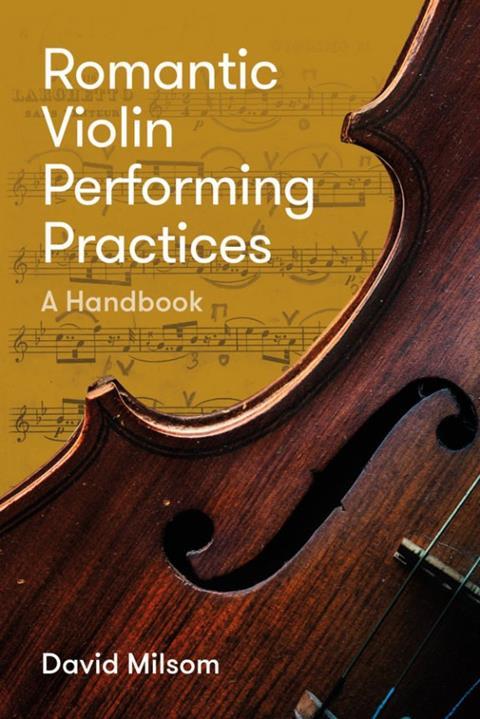 David Milsom examines the key concepts to be assimilated, as well as the various obstacles to be overcome, in ‘rehabilitating’ stylish performances of the violin repertoire from c1840 to c1920. Comprising twelve chapters arranged in five themed parts, his handbook initially re-assesses the perceived gulf that exists between scholarship and the performance of ‘romantic’ music and encourages the establishment of some positive footing for improved collaboration. Part 2 relates expressive aspects of nineteenth-century violin performance to ‘vocality’ – singing technique and style and speech or declamation. Arguably a candidate for earlier inclusion, the third part introduces the most relevant research resources and offers ‘experiential perspectives’ on matters of organology, pedagogy and the effectiveness and limitations of studying historical treatises and annotated scores. Despite their various technological and other limitations, early recordings are favoured over words for making qualitative assessments of expressive devices such as vibrato, portamento, rubato and tempo flexibility, courtesy of recent computer software developments.

Milsom’s subsequent examination of the practical application of romantic performance ideals effectively delineates his own research career to date. Focusing on his theoretical/practical work with his influential mentor Clive Brown and others at the University of Leeds, it includes an informative case study of Joseph Joachim’s legacy, performing philosophy and traits, fleshed out with references to Joachim’s Classical German ‘school’ pupils Karl Klinger and Marie Soldat. Milsom also endorses the valuable insights achievable from re-enacting historical interpretations on record and evaluates three examples of his own persuasive reconstructive emulations of Joachim’s style. The handbook’s final part, using Spohr’s Violinschule as its pilot source, comprises practical advice and technical and stylistic exercises designed to assist violinists in fulfilling their ‘vital responsibilities’ of ‘resourced experimentation’ and assimilation of the concepts discussed.

One potential weakness of the volume is that ‘selected’ sources for examination have been limited to those available in English or English translation; another is the second chapter’s inconclusive and arguably superfluous investigation into the notion of a twentieth-century ‘modernist revolution’ in performing practices and aesthetic thought. Further, some readers may dislike Milsom’s somewhat repetitive, idiosyncratic and self-centred ‘experiential’ approach and his dour, over-defensive writing style, which also incorporates substantial direct quotation when paraphrasing would have been more laconic and offered greater coherence. Footnotes are too numerous, user-unfriendly and sometimes incomplete, inconsistent or even discrepant; often unadvisedly employed to supplement the text rather than simply reference evidential sources, many are overlong, causing the reader unnecessary navigational problems and serious distraction from the narrative’s thread. Several typographical errors remain, including some notorious spelling aberrations, and source dating is occasionally inaccurate. Regrettably, too, the text on the book’s verso pages is such that line-endings often dribble into the binding.

Negatives aside, Milsom’s handbook has been painstakingly researched, branching outwards from his cornerstone Theory and Practice in Late Nineteenth-Century Violin Performance 1850-1900 (Ashgate, 2003). Refreshingly, he sometimes modifies views expressed in this earlier volume and focuses more sharply on the practical application of the techniques, language and style examined. His text is supported with pertinent illustrations and music examples and its scope is expanded by a wealth of further materials accessible on a dedicated website, including his own recordings, links/references to selected historical recordings and extensive appendices. There is also a substantial and well-organised bibliography, a selective discography and a helpful index. Although, as Milsom admits, any performance, however ‘historical’ its intent, ‘is only ever an imaginative act of the present’, his handbook contributes significantly to our understanding of stylistic trends in ‘romantic’ violin performance. It represents a genuine attempt to encourage the recreation of some of the fundamental interpretative principles of the period and ‘espouse … a credo for future performance’. It just lacks that final polish.