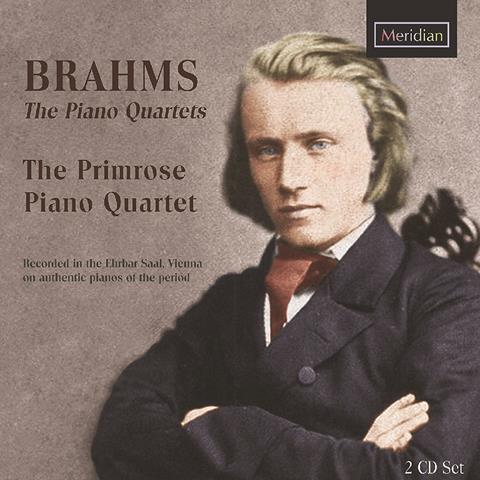 Description: Not an ounce of spare fat on Brahms in transformative period performances

Employing early pianos made by Julius Blüthner (no.2), Johann Streicher, contemporary with and identical to the one Brahms owned (no.1) and a cross-strung Friedrich Ehrbar (no.3), these fine performances seek not only to provide a flavour of the sonorities prevalent during the last three decades of the 19th century, but also to brush aside the cobwebs of stultifying interpretative tradition by going back to the original sources. Using gut strings with lustrous intimacy and tonal radiance, violinist Susanne Stanzeleit, violist Dorothea Vogel and cellist Andrew Fuller complement the chamber-scale pianistic luminosity of John Thwaites with a sensitivity to texture and articulation that contrasts startlingly at times with the warm bath of sound associated customarily with these glorious scores.

The ‘Gypsy’ finale of the G minor Quartet (no.1), for example, lacks nothing in exhilarating forward momentum and impassioned pizzazz, yet instead of being greeted by the usual wall of pseudo-symphonic sound, the effect is as though one were sitting in an intimate salon. The C minor (no.3) also emerges as more restlessly brooding than usual, with countless details emerging that often lie hidden beneath a haze of sonic opulence. However, it is the more overtly lyrical A major (no.2) that is most memorably transformed here, with a flexibility of phrasing, organic suppleness of tempo and tender espressivo that are deeply affecting. The whole is enhanced by immaculate production standards.