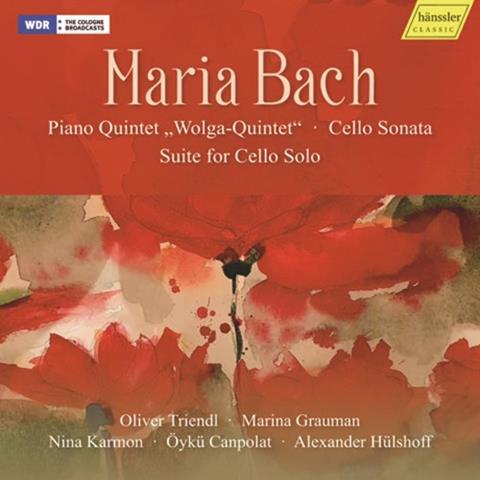 No sooner has CPO released a fine collection of Maria Bach’s chamber music (reviewed last month), than rival German label Hänssler produces its own selection, with the ‘Wolga’ Piano Quintet and Cello Sonata common to both.

Side-by-side comparisons reveal distinct differences of approach in the quintet: the Hänssler players are slightly swifter in all three movements, more impassioned in their emotional responses, and boldly project a concert-hall ambience, enhanced by the gently distanced engineering. By comparison, the CPO players achieve a chamber-scale intimacy that emphasises the music’s Debussyan harmonic flavours and colours.

The Cello Sonata encapsulates the essential differences between the two sets, with Alexander Hülshoff and Oliver Triendl bringing to it a forthright passion, whereas Matthias Johansen and Yukie Takai (CPO) are more inward.

Hülshoff rounds out the Hänssler collection with the four-movement Solo Cello Suite written for Bach’s sister Henriette. Remarkably, for such an accomplished work, it was never performed publicly during the composer’s lifetime (Maria died in 1978, aged nearly 82). Hülshoff, boldly recorded, plays with fiery temperament and tonal opulence.