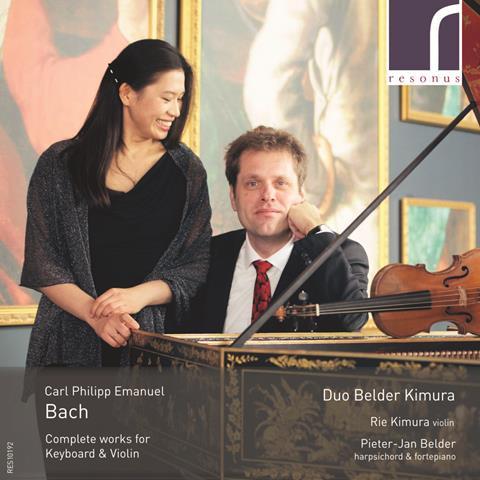 This comprehensive survey of C.P.E. Bach’s works for keyboard and violin traces his artistic development from the period of his father’s influence through to the expressive sensibility and freer dialogue of his maturity. Rie Kimura and Pieter-Jan Belder convey this development with technical assurance and sound stylistic appreciation. Kimura coaxes a lyrical flexibility from her violin, its sonorous tone enhanced by her restrained but telling vibrato usage, notably in the Adagio of the C minor Sonata. There are some isolated occasions when her shifting sounds inelegant and her intonation questionable, but her playing is generally neat, poised and tasteful. Belder, too, plays with a spontaneity and sense of timing that allow the music to breathe, and he negotiates the juxtaposition of figured bass and fully notated episodes in, for example, the Sonata in B minor with a degree of smooth efficiency. The genre’s conversational element is well exemplified throughout, particularly in lively allegros such as the outer movements of the F major Sonata or the second movement of the D major, this latter played with invigorating rhythmic drive and subtle articulation. Kimura’s expansive contribution in the Poco andante of the B minor Sonata is especially affecting and Belder’s stylish cadenzas enhance the D major’s two slow movements.These players use a fortepiano for their accounts of the Fantasia and the Arioso. They convey the contrasting characters and textures of the Fantasia with deft timing and virtuosity, and they negotiate the Arioso’s variations with some humour and aplomb. They are well served by the gently resonant church acoustic and Resonus’s vivid recorded sound. ROBIN STOWELL