Book review: Musicians in Motion: 100 Exercises with and without Instrument 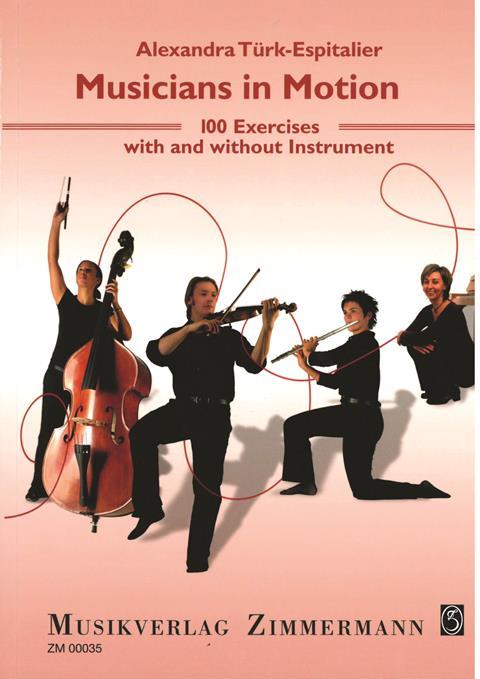 Musicians in Motion: 100 Exercises with and without Instrument

Musicians in Motion: 100 Exercises with and without Instrument

Like sportspeople, today’s musicians are increasingly aware of the need for good body use. Alexandra Türk-Espitalier’s book presents a practical training programme for those seeking to stay on top of their game.

After the introduction and before laying out the exercises, the author describes the four main aspects on which to focus: mobilisation, strengthening, stretching and coordination. She then presents well-illustrated exercises divided into body parts, from the lower back to the fingertips, from which players can create their own individual programme away from the instrument. Many of the exercises seem to be inspired by yoga: the ‘tree’, ‘bridge’, ‘mountain’ and ‘child’ poses appear. There are helpful tips on what the reader needs to focus on during practice, such as, in a standing position, being aware of gravity and its opposing force (which she calls ‘lift up’). There is a short section on breathing, after which the author proposes five useful 30- to 40-minute training schedules. Only then does Türk-Espitalier bring the instrument into the picture, for example adding the bow to an arm pendulum movement and using the helpful image of a suspension bridge between the finger on the string and the shoulder blade to free the elbow and wrist. There follows a section on injury prevention, which includes a list of instruments with exercises tailored to the demands of each.

As a musician experienced in yoga, I find the instructions too focused on building strength, with not enough about how movement can happen naturally on release, especially in response to the breath. When I think of the musicians whose physical ease I admire most, I would say that, rather than ‘strong’, they are efficient in their movement. But I’m sure that many musicians will benefit from an approach where the body is the main instrument. This is, I believe, at the heart of what Türk-Espitalier seeks to present and, at a time when many people in the music world are seeking guidance for such issues, a book like this is most welcome. I am sure that, as a result of it, the strain and injury musicians suffer in the future will be greatly reduced. The tone is friendly, although the translation from the German is sometimes sketchy: there are places where the English is stilted, and that is a shame because it detracts from what is essentially a useful and well-presented book.