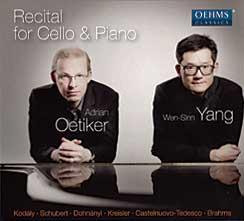 This balanced recital programme offers both familiar and less well-trodden repertoire, the latter including Kodály’s Sonatina – a mix of folk elements infused with Debussyesque Impressionism. The result is a performance of engaging charm, in which both performers are intuitive to the improvisatory aspects of the music. Dohnányi’s Cello Sonata equally merits far more attention, from the weighty Brahmsian first movement to the furious, scampering scherzo and its final set of variations. Again the performance is stylish, technically formidable and utterly convincing, aided by an outstanding recording of great clarity and warmth.

Even so, the treat of the recital is a beautifully tasteful rendition of Schubert’s ‘Arpeggione’ Sonata. The gloriously vocal melodies are allowed to sing, guided rather than ordered around, with both artists particularly poignant and sensitive in the Adagio. The ensuing Allegretto is full of lightness. Following the pattern of a concert, the encores offered after the sonatas are both unusual and entertaining. Kreisler’s Tambourin chinois, usually heard on the violin, transfers to cello effectively and is given a superbly characterised interpretation, shimmering with brilliance. Technical pyrotechnics also dazzle in Castelnuovo-Tedesco’s witty and engaging ‘Largo al factotum’ paraphrase from Rossini’s Barber of Seville.