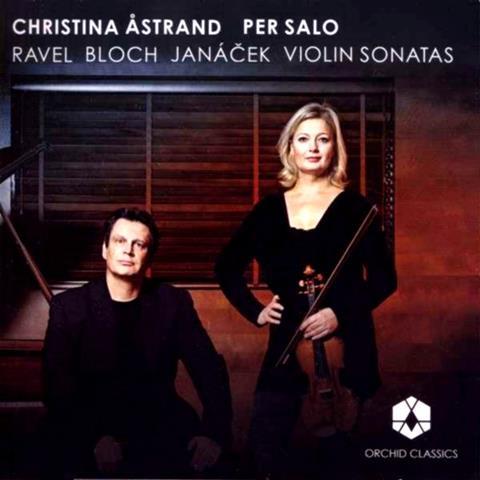 This new release from Christina Åstrand, the principal concertmaster of the Danish Radio Symphony Orchestra, is recorded in the acoustic of a large empty concert hall, which gives the pizzicatos in the Ravel Sonata a gunshot quality. Where my benchmark in this work, the incomparable Viktoria Mullova (in her deleted 1990s Philips recording), has an instinctive response to the Blues movement, Åstrand superimposes the ‘naughty’ effects on her classical background. Her intonation is also sometimes questionable in what is otherwise a suitably brilliant finale.

Bloch’s second violin sonata, the Poème mystique, receives the most successful performance on the disc. As in the Ravel, though, Per Salo’s piano is balanced far too closely, with the violin almost swamped in the music’s more brooding moments. With a warming vibrato, Åstrand brings an unusual feeling of sadness to the opening movement of the Janá?ek, but she stops short of the aggressive sounds required in the last two movements. Indeed, throughout there’s a lack of engagement with the composer’s many mood changes.

I am not sure why we also need a DVD of ‘live’ performances of the same programme made a few months previously, although there we find a degree more attack in the Janá?ek.