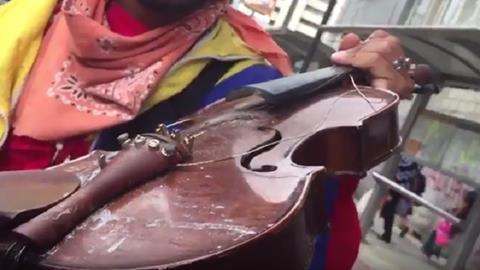 Wuilly Arteaga, who has become known in Venezuela for performing his violin as a method of peaceful protest at the country's street demonstrations, had his instrument broken at a recent anti-government rally.

A video of the tearful musician holding his damaged instrument went viral yesterday.

According to Artega, the instrument was damaged when National Guards' motorcyclists 'came up and grabbed the violin by its strings' while he was playing his country's national anthem, writes BBC News. Artega 'refused to let go and fell down, hurting his leg'.

Since viewing the video a growing number of people have offered to raise funds for a new violin for Artega, who has expressed his thanks in a filmed message.

Protests against Venezuelan president Nicolás Maduro have taken place on a regular basis since April in the midst of soaring inflation and a rising crime rate in the country.