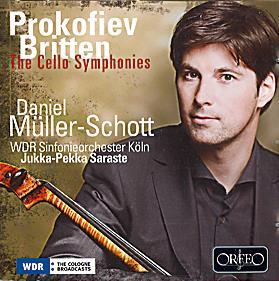 Two works indebted to Rostropovich and premiered by him in Moscow are paired here by top German cellist Daniel Müller-Schott. Prokofiev’s Symphony–Concerto opens arrestingly, the sound so immediate that it puts you right in the middle of the cello section. Müller-Schott grips the listener straight away with his intense, fast vibrato and passionate portamento over the marching of the strings. The solo line has plenty of presence throughout, even if it’s not always prominent in the balance. He makes palpable the feeling of panic in the virtuosic Allegro giusto, and plays its Espressivo with graceful yearning. The piece concludes with more impassioned playing and impossibly high broken chords off the fingerboard of his 1727 Gofriller cello.

Britten’s Cello Symphony takes the cellist even further from the solo pedestal. Müller-Schott’s abrupt opening chords snap like scissors, but he is very much at one with the orchestra as they move forward together. After the parodied emotion in the Presto there is no doubting the sincerity of the opening statement of the Adagio, or of the inspirational ushering in of the finale. It is frustrating not to hear more of these huge, spread chords, but Müller-Schott remains embedded in the orchestral texture in a performance notable for its restraint and control.