The German musician's lessons with Haiberg at the Lübeck Musikhochschule were intimidating, but ultimately invaluable 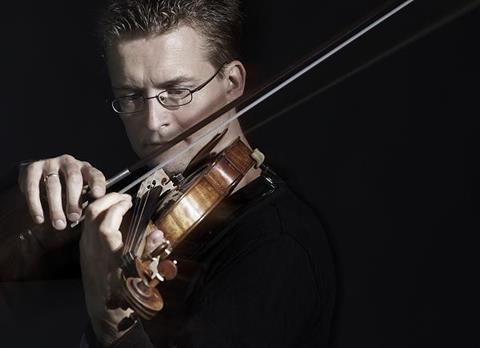 You could print it on a T-shirt: I studied with Uwe-Martin Haiberg... and survived! As professor of music at the Lübeck Musikhochschule, and my violin teacher from the ages of 15 to 19 and 21 to 23, Mr Haiberg was the first teacher to really push me. His lessons were often gruelling, expectations were very high and his friendship was overpowering. But there are many others in Germany who have also learned so much from him, such as Heime Muller of the Artemis Quartet and Michael Mucke of the Fontenay Trio.

When I began lessons with Mr Haiberg at the Musikhochschule, I hit a crucial turning point in my playing. Up until that point I had been studying with Professor Evelyn Distler, who took a relaxed approach to lessons. I was a strong sightreader and had never really needed to practise more than one and a half hours each day, spending much of my time playing pieces for enjoyment, but without really putting the work in. Haiberg made me focus on discipline and technique, firstly by making me practice double-stops, scales and arpeggios thoroughly, then with studies: Kreutzer, Paganini and Dont.

Each week we met for at least a one-hour lesson, the first half of which was dedicated to scales and exercises. I had already won two national competitions, and I made my debut with an orchestra when I was twelve, so his thoroughness was initially quite intimidating: scales highlighted not only the flaws in my technique but also a high level of inconsistency in my playing. With bow-control exercises, he pushed me to aim at a hundred per cent accuracy, rather than relying upon luck. He also encouraged me to practise for up to three hours each day, starting me off with the Vieuxtemps Concerto no.4, Wieniawski F sharp minor no.1 and the Beethoven.

But the Kreutzer Etudes were Haiberg's Old Testament. I learnt all of the studies by heart, addressing each of their technical problems in the most basic manner. In order to get my vibrato under control, for example, I would practise the first study with just separate hand vibrato, then separate arm vibrato, then in controlled speed with a metronome matching the number of vibrato swings. It meant that my arm and hand vibratos became two completely different entities: hand being for more relaxed expressions and arm sounding best in the higher registers with lots of pressure.

We went through all the usual exercises, making studies sound like proper pieces and then stealing bits of concertos in order to practise technique. But when it came to learning repertoire - and I learnt all the major pieces with Haiberg, including the Mendelssohn and Tchaikovsky concertos - I would only learn from orchestral scores. It made learning much harder because I would have to come up with my own fingering and bowing, often arriving at interpretations that were difficult to play. Still, it taught me to think for myself instead of just imitating, for example, Carl Flesch's reading of Mozart, and it furthered my ability to understand the whole of each work.

As well as our one-to-one lessons, Haiberg would also bring his pupils together for chamber music performances three times a year. With all repertoire he was always very particular about meaning and interpretation, taking each piece note by note, or phrase by phrase, in order to pinpoint exactly what it was saying. He would often remind us that playing is like speaking and it was up to us as performers to preserve the natural flow of phrasing and rhetoric of each work. At the same time as encouraging us to let the music breathe, he would often get us to practise with a metronome, which formed the backbone of our playing.

Lessons with Haiberg were very good for me, and we shared a lot of fun times, cooking and eating together too. But my levels of self-criticism became so intense that when it came to learning with Walter Levin at the Cincinnati Conservatory I welcomed time away in the US. Through forming friendships on a personal level, Haiberg could apply pressure to succeed. Some pupils obviously needed pushing, but those who failed to live up to his expectations often found him impossible to learn with. For some it is a painful experience, but I was one of the lucky ones.

This article was first published in The Strad's March 2002 issue