‘The objective was Bach, not Biondi’ 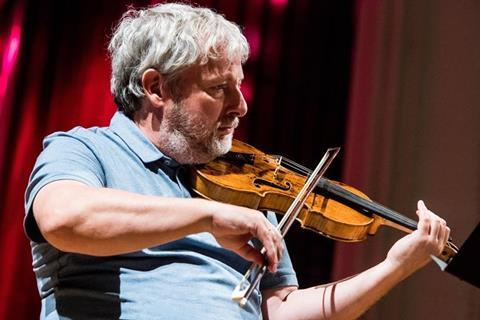 The following extract is from The Strad’s November 2021 issue  Session Report ’A Question of Balance’. To read it in full, click here  to subscribe and login. The November 2021 digital magazine and print edition are on sale now

Asked if he opted for historically accurate instruments on the album, Biondi responds ‘ni’ – a combination of no  (‘no’) and si  (‘yes’) in his native Italian. ‘That’s not my priority,’ he clarifies. ‘Of course, I am  interested in old instruments, and I used gut strings and a Baroque bow, but the language is the first step – to think about your approach to the chords and the problems of polyphony. On this album, I had the opportunity simply to speak through Bach’s music. The objective was Bach, not Biondi.’

Practical examples of this philosophy of his are plentiful. ‘I’m sure some will be shocked by my approach to the Chaconne’s arpeggios. The arpeggio in Bach’s time had many different meanings; there are many ways to execute it. So here was a chance to show many solutions to the issue of “arpeggio”.’ He goes on: ‘Sometimes the audience is dogmatic about Baroque pitch. But in those times, pitch changed every 30km within Europe! So, do we use the pitch of the place, composer or performance? We could instead spend this time thinking about ornamentation.’ Another opportunity for experimentation was tempo. ‘It is very interesting to think about the relation between tempos in the works, especially with the returning doubles  in the first partita.’

Biondi is philosophical about leaving a lasting legacy through his recording. ‘I think we are in a dangerous moment, where musicians often use music to show their ability,’ he says. ‘But if you want the audience to say, “Wow!” you must accept that the sound cannot always be perfect – instead it should be natural. I worked a lot with my engineer to make the recording feel like a live concert.’

He also notes the dangers of risk-averse interpretations of Bach, fuelled by the composer’s sacred place in the musical canon. ‘We often hear, “Bach is too important to touch.” But we must accept that we play Bach’s works in a completely different social context from the one in which they were written. We should use our knowledge of past and present eras to develop new approaches. I won’t do something new for the sake of it.’