Cremona’s Mondomusica trade fair, held annually in the Italian city, was unable to go ahead as planned this year due to coronavirus. Charlotte Smith attended the alternative Special Edition, and witnessed a host of creative ways to deal with the pandemic 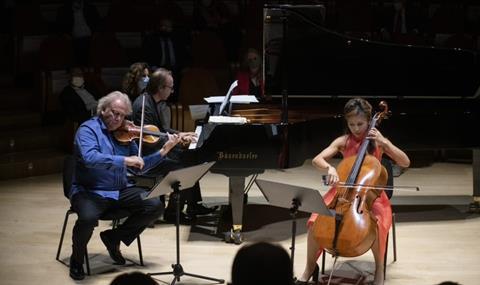 As I entered the curved, wooden-panelled Auditorium Giovanni Arvedi of Cremona’s Museo del Violino, I experienced a simultaneous sensation of the familiar and the alien. At first glance the handsome space, with its resonant acoustics, was just as it had been when I was in Cremona one year ago, yet on closer inspection, the differences were marked – two in every three seats bore a paper sign forbidding audience members from sitting there, and every member of the assembled throng wore a face mask, which they did not remove for the entirety of the two-hour performance. On entering the building each audience member had their temperature taken via a wrist scanner, adding to a surreal Brave New World-style atmosphere.

When The Strad team attended the Mondomusica trade fair in September 2019 we could not have foreseen the extent to which our world would change in the space of a year, but despite the myriad challenges of Covid-19, those at Cremona Musica were determined not to let their annual event be cancelled outright. And so, in its place, they launched a one-off Special Edition, consisting of live concerts and pop-up performances around the city, panel discussions at the university, a keyboard contest, instrument exhibitions, and virtual ‘speed dates’, giving luthiers and dealers the opportunity to showcase their work for an online audience. This innovative melding of live and digital meant both that Stradivari’s city was never silent for those lucky enough to attend in person, and that a wider audience, necessarily separated by geography, was able to connect via the wonders of technology.

The concert at the Museo del Violino opened the festival in traditional style – or as close to this as possible – with performances of Beethoven and Boccherini by Belgian violinist Michael Guttman, Chinese cellist Jing Zhao (winner of the 2005 ARD Cello Competition), and Italian pianists Alessandra Ammara and Roberto Prosseda. This was a concert that didn’t disappoint – the auditorium’s string-friendly space allowed us to hear bow on string with all the satisfying grit that only an in-person performance can provide.

In Beethoven’s ‘Spring’ Sonata, Guttman was authoritative in the first movement and tender in the second, if a little rough around the edges throughout, aided by sensitive and pure-toned keyboard playing courtesy of Prosseda. Following this was Boccherini’s Sonata for violin and cello in D major, in which Guttman was joined by Zhao. By turns charming and exciting, the work showcased complex passagework and ingenious interweaving of parts. Finally, there was Beethoven’s Third Cello Sonata from Zhao and pianist Ammara, which the former played from memory with considerable depth of sound. True, I missed any sense of lightness or playfulness, but this was a passionate and physical performance, again enhanced by some highly accomplished keyboard work, which finished at breakneck speed, much to the crowd’s delight.

For all its sense of occasion, the opening night was just one of many performance highlights throughout the festival. On the second evening, the Consorzio Liutai ‘Antonio Stradivari’ – a collective of around 60 stringed instrument makers from Cremona and the surrounding areas – hosted a concert of Italian operatic arrangements performed by the Bazzini Quartet (formed in 2010 to promote the works of its namesake). Held outside the Consorzio’s premises, the performance attracted a large, informal crowd of masked onlookers to the Piazza Stradivari – many taking photos and filming with their smartphones. The enjoyable snippets were enhanced by the group’s dynamic: a sweet and lean first violin tone, rich middle instruments and a full bass. But perhaps most interesting was the decision to retreat inside the showroom to swap instruments every five minutes or so in order to showcase the work of as many of the collective’s makers as possible. This neat visual and aural trick kept the audience entertained long after the still-mild daytime temperature dropped to just the wrong side of comfortable as night descended.

Further outdoor performances placed the guitar on centre stage, but still used bowed strings to prominent effect. Late on Saturday evening Italian guitarist–vocalist Beppe Gambetta took to a specially erected outdoor platform in the Courtyard of Federico II to perform a folk-infused acoustic set entitled ‘Where the Wind Blows’ with double bassist Riccardo Barbera. Gambetta’s gravelly voice and broken chords, supported by low-key bass pizzicato, made a highly atmospheric accompaniment to the ghostly up-lit pink stone of the surrounding buildings, and again drew sizable crowds. The next evening, fellow Italian guitarist–vocalist Andrea Tarquini was joined on stage by Trio Cavalazzi: sibling violinists Elisa and Alessio, and cellist Andrea. This was a thoroughly enjoyable set, consisting of a range of songs in both Italian and English, made all the more special by faultless jazz playing and ensemble work by the young string players.

Elsewhere, the festival showcased the work of the city’s accomplished local makers to great effect. A small live exhibition in Cremona’s City Hall drew a steady stream of musicians and enthusiasts throughout the Saturday and Sunday – a nod to the noise and bustle of the much larger trade fair that usually dominates the area at this time of year. Meanwhile, the half-hour ‘speed dates’ were live throughout the weekend, free to watch via Zoom and now available on YouTube (bit.ly/3d50nEC). Taking place in the Auditorium of the Museo del Violino, each ‘date’ presented the work of a different luthier, with an accompanying discussion in both English and Italian of the philosophies and making styles at play, followed by a short performance on an example instrument. This elegant response to the Covid crisis was a wonderful opportunity for each maker to speak directly to potential buyers internationally – an example of how it is possible to react to the current restrictions with solutions that may, in time, improve on traditional ways of operating.

Certainly, the round-table discussion on ‘Concerts in the post-Covid era’, held at Cremona’s University on Saturday afternoon, provided much food for thought. Among the eight musicians and promoters taking part in the live – and simultaneously streamed – event was pianist Andreas Kern, founder of Piano City Festivals, who brought a positive outlook to a pandemic that has decimated so many live events this year. ‘This is a chance for the arts to find concepts that have value because of not being together,’ he said. ‘We can save energy and money, and produce less CO2, all the while finding ways to be better connected. It’s an opportunity to explore new repertoire by composers who can write for changing circumstances, and to use different, inventive formats.’ It was a description that could easily fit the Special Edition itself. We can only hope that by this time next year, Covid-19 will no longer hold such sway over our lives – but the need to respond creatively to current events may yet lead to good things.