I discourage my students from using a shoulder rest, says violinist Aaron Rosand

Only without a shoulder rest can one develop a personal sound that is identifiable, insists the Curtis Institute and Mannes College professor 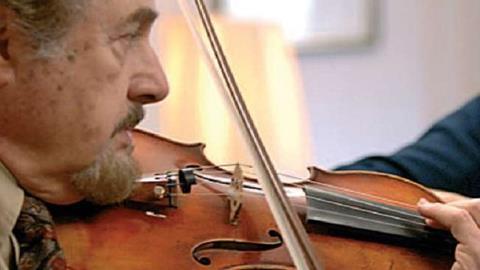 Position is the most important thing in developing good players, as it affects the tone. Odd as it may seem, no one these days will tell you how to hold the violin. In all parts of the world now, teachers are advising their pupils to use a shoulder rest because they say it makes playing easier.

Heifetz would tell pupils not to walk into his studio if they had a shoulder rest. I’m not quite that severe, but I do strongly discourage them. They place the violin in the wrong position and upset the angle of the fingertip on the string that produces vibrato. The position of the left arm is completely out of place, because in the Auer school the violin rests on the clavicle rather than the shoulder. Your eye should look down the fingerboard to the scroll, and the left arm has to be placed well under the violin. With a shoulder rest, the left elbow flies out because the shoulder rest – not the player – is holding the violin.

The control of vibrato speed is never as good with a shoulder rest. The fingertip rotates on the string and the vibrato often comes from the arm rather than the fingertip and is usually very one-dimensional. Only without a shoulder rest can one develop a personal sound that is identifiable. Heifetz, Milstein, Elman, Oistrakh and Szigeti managed beautifully without one.

If a student has become accustomed to playing with the thumb extended too far forward, it’s very difficult to move that thumb back and, without any pressure on the neck of the violin, to get the fingers articulating independently. The fingers must bounce off the strings like little springs. Every finger has to be independent. Only in this position comes pure intonation. The left hand becomes like a machine. No matter where it is on the violin, the intonation will be perfect and pure.

The shoulder rest also affects the bow arm. If you move the violin to the left, the right arm must be extended, requiring the application of more pressure to the string. That increased pressure employs not only the hand or wrist but also the arm, a fundamental breach of proper position for Auer and all the other great players of the past.

This article was first published as part of a larger feature in The Strad's September 2007 issue.