7 ways to improve your tone 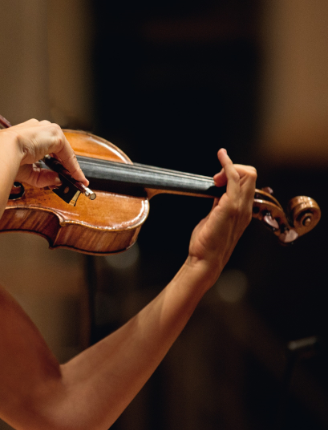 ‘The whole musical impression which we create by our tone must have its origin in ourselves, in our soul, and we cannot expect to have a really beautiful, noble tone unless we saturate the tone with the beauty and nobility of our own feelings. All effect upon the listener depends on the close connection of the tone produced with our feeling.’
Emil Krall, The Strad, October 1912

2  No note should be wasted

‘His tone radiated vitality and virility at all times: he could sustain his vibrance from note to note, finger to finger and position to position and there was never a “wasted”, dead note in his tonal lexicon.’
Henry Roth on Fritz Kreisler, The Strad, November 1996

3 Have the sound already in your head

‘The prerequisite to having a beautiful tone is to have the sound already in your head. Just like we speak with the accent of the language we hear, we will want to produce a tone like those we hear from our peers, teachers and in recordings and concerts. The sound is internal, not external. We must have an efficient, flexible and balanced body that is able to produce that sound.’
Tanya Carey, The Strad, May 2003

4 Tone should be taught from the beginning

‘At whatever age, the sound of string instruments should be absorbed and daily listening encouraged. Likewise, the interest of the pupil should be concentrated in the early stages on sound, on tone production, and not too intensely on technical matters or the physical aspect of playing. The most important single aspect of learning to play a string instrument is the production of good tone.’
Watson Forbes, The Strad, January 1979

5 The application of the bow

‘Your first study should be the true manner of holding, balancing, and pressing the bow lightly, but steadily, upon the strings, in such a manner as it shall seem to breathe the first tone it gives, which must proceed from the friction of the string, and not from percussion as by a blow given by a hammer upon it. This depends on laying the bow lightly upon the strings at the first contact, and on gently pressing it afterwards, which if done gradually can scarcely have too much force given to it, because if tone is begun with delicacy there is little danger of rendering it afterwards either coarse or harsh.’
Giuseppe Tartini, The Strad, December 1891

‘The great cardinal mistake with most violinists is that they employ the forefinger for holding, incidentally, carrying, the weight of the bow. This should be chiefly done by the two middle fingers and the thumb. The forefinger, on the contrary, ought to be considered more in the light of a brake, which is put on and off at will in the work of tone-production.’
Augustus Leonard Sass, The Strad, November 1914

‘Some ideas in our art are never defined and never given the benefit of a second thought. One of these is the precept that in order to preserve the uniformity of the tone colour for a given part one must stay on the same string. The idea was already stated as a matter of course in the works of Carl Flesch and Israil M. Yampolsky. It comprises two preconceptions: first, that for a given part the same tone colour is desirable; and second, that only by playing on the same string can such unity of tone colour be achieved. Both are valid only up to a point – and are more interesting and convincing on paper than in the real world of tones.’
Rok Klopčič, The Strad, October 1998