From The Strad Archive: string players at the Coronation on 2 June 1953

The following is taken from the pages of The Strad June 1953 issue. Below a brief contents, which promises articles on viola da gambas, violinist Charles de Beriot, the legato stroke and an article entitled ‘A clearer view of the viola’, among others, is a brief editorial summary of the string players featured at Her Majesty Queen Elizabeth’s Coronation.

Sixty players selected from the leading orchestras of the country will play at Westminster Abbey for the Coronation on June 2.

The remaining players are either principals or past principals of famous orchestras or ensembles and ten of the members also played at the Coronation of George VI in 1937.

This special orchestra will play through­out the service. It will be led by Mr. Paul Beard and will be conducted by Dr. William McKie, organist of Westminster Abbey. It will also play a programme before the service, starting at 9 a.m. and for a short time afterwards under the direction of Sir Adrian Boult.

An exhibition illustrating the connection of British Royal persons with music from the time of Queen Elizabeth I to the present day has been opened to concert-goers in the Royal Festival Hall. The Galpin Society has brought together instruments and documents, many from private collections, and Mr Harry R. Bears has lent portraits and engravings. Included in the instruments is a cello played by George IV when Prince of Wales, and a little violin used by the first Duke of Edinburgh when a child. 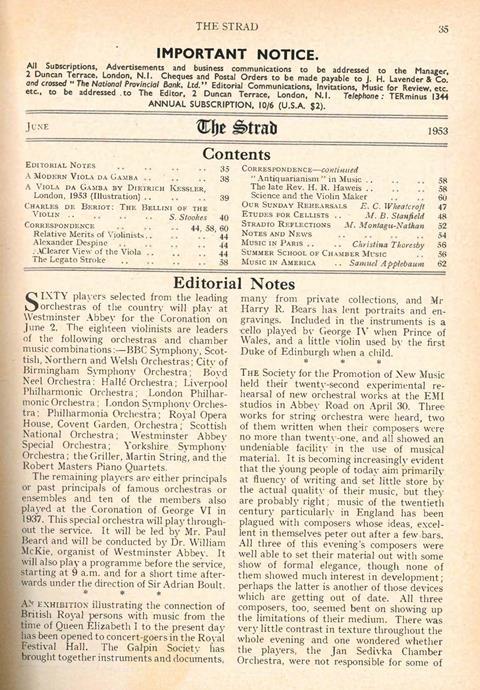