14
Crash course: are there benefits when things go wrong in a competition?
Playing Hub

Crash course: are there benefits when things go wrong in a competition?

There was drama at the inaugural Carl Nielsen International Chamber Music Competition this week, in everything but the string result, writes Andrew Mellor. From 2015 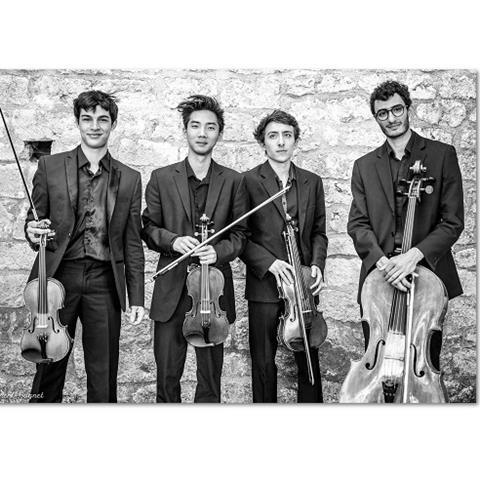 There was no great surprise at the string final of the Carl Nielsen International Chamber Music Competition in Copenhagen last night. Quatuor Arod from France (pictured) had shown from the start that it was a serious contender, and its performance in the final stepped spectacularly up to the mark via some of the most nuanced quartet playing I’ve heard. ‘I would certainly give up a night – even change my plans – to hear them play again,’ jury member Clive Greensmith, former Tokyo Quartet cellist, told me at the reception afterwards; ‘they completely draw me in.’

Quatuor Arod hardly put a foot wrong all week. But this inaugural chamber music competition – run for string quartets and wind quintets in parallel, and carried live by Denmark state broadcaster DR from first note to last – was marked-out by some less-than-perfect moments on stage. The first came in the second round of the wind contest when Christopher Beagles, horn player from the Atéa Wind Quintet from the UK, reddened, wobbled and then tumbled to the floor in full flow. It turns out Beagles had eaten a juicy little tomato in the canteen just before the performance. Except, it wasn’t a tomato. It was a red chilli. Still, the Atéa Quintet laughed it off, got to the final, won the Contemporary Prize and became the talking point of the wind contest.

In the string semis the next day, a good way into Bartók’s fearsome Sixth String Quartet, the cellist of the Alinde Quartet from Germany broke his bottom string. He looked pleadingly at his colleagues for a few moments before the music juddered to a halt, and then equally pleadingly at the jury. ‘Just go and change it’ suggested chair Michael Schønwandt. But as the players shuffled gingerly off the stage at Copenhagen’s Royal Library, word got around that the cellist didn’t have a spare C string. Incorrectly, as it happens; jury member Troels Svane headed back stage with his cello, not to offer a spare string but to help fit it, so shaken was the cellist at the disruption.

He needn’t have been. The Alinde Quartet acquitted itself very well indeed after the incident. Its Bartók gained intensity, and its performance of Martin Stauning’s beautiful Welkende Schalen (the prescribed contemporary piece) was arguably the best of the day. But rewinding just a second, what options did the quartet, and particularly its cellist Josep Castanyer Alonso, really have in that moment? ‘You have to make a snap decision: can I do without the string?’ British cellist Jacob Shaw told me afterwards, and I’m not sure the pun was intended. ‘In that Bartók you can’t.’ Perhaps in any piece, without a C string, a cellist is pretty scuppered.

The Alinde Quartet might not have made it to the final, but it learned a thing or two last week - mostly to have a calm, confident plan for when things go wrong. But others in the competition were adamant that the incident was a positive. ‘When you break a string in a competition, you rejoice. It’s one of the most exciting things that can ever happen in a performance,’ says Elliott Perks, violist in the Maxwell Quartet from the UK, which also reached the semis. ‘Breaking a string used to be a neurosis of mine, a real fear. Then I broke one in a concert and it was all anyone could talk about. Sometimes it’s the most exciting thing an audience can experience. So, relish it,’ he says. ‘Any string player on an international jury will have been through it,’ added Perks’s colleague, the Maxwell’s violinist Colin Scobie. ‘They understand the pressures.’ In this case, the jury delivered more than understanding. But an experience like that, in a competitive environment, is surely character building for any ensemble.