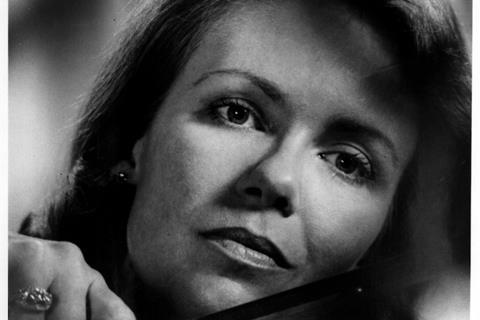 In February 1987 Louise Cavanaugh Sciannameo, then editor-in-chief of The Violexchange, interviewed the virtuoso violinist and pedagogue Camilla Wicks, who was then a faculty member in the University of Michigan’s School of Music. That interview—unpublished—was archived. Now, following Wicks’s death, Sciannameo has chosen to share her words

Camilla Wicks (speaking to Sciannameo in 1987):

I’m really very supportive of the work that’s being done to enable women in the arts to achieve equal pay, equal opportunity, all of this. But I think that women have entirely different lives than men do. Our satisfactions are different. Perhaps women can enjoy periods of extensive travel which go with a big career. But I don’t think that most women want this all their lives. If a woman intends to have some years of a big career—does not desperately hold on to that career once those years have passed—and can easily move on to other prospects, I think that woman will have a more successful life. But what does success mean? It’s different for each of us.

Often, a successful career involves playing too many concerts. I think that women probably do not want to play the same pieces again and again to the point at which the meaning disappears. They do not want to play simply because it’s their profession and they have to have a career. Their motivations for giving concerts is different, and, after a time, perhaps playing becomes less rewarding. As a consequence, a woman may have a slightly slower career than a man. She chooses to make fewer appearances. Hasn’t that often been the case?

One of the advantages of a male on the concert stage is that he has a wonderful traveling companion in his wife. He can almost bring a home life with him. Of course, there are cases where the husband travels with his musician wife; but the percentages are small. There are so many factors to consider. Such a husband would have to be willing not to have a place of his own, except as it relates to his wife.

As far as attitudes and expectations of artistic managers are concerned, I think there is an unwritten condition that a woman will remain single. There is an understanding that if management is going to spend money on her, the woman isn’t going to do anything foolish—like getting married. In contrast, a man may be encouraged to settle down at a certain point in his career.

I don’t think the difficulty of having a career, marrying, and raising children will ever be solved. I didn’t dare tell management when I was pregnant. It was so hard. I wore special dresses and learned how to walk so I didn’t look pregnant. And it worked. I was eight months pregnant when I played Beethoven’s Violin Concerto at Carnegie Hall and no one knew.

I have five children. What kept me going was that it was vital for me to meet my professional obligations. It was important to do all these things. And between tours I was caring for my family. Before each tour I would either make arrangements with my husband’s mother or I’d madly seek a babysitter. And I went. I travelled alone.

At a given point, I moved with my children to a lake which was 25 miles from the nearest house. And I got to know myself. As a result of these respites from playing, I don’t feel as much of the music scene as I might otherwise.

My career began in 1947. I remember when I was first touring, my father was so proud of me that when he gave the managers my repertoire list, he included dozens of pieces, concertos. And his little 17-year-old girl was to play all these. Mine was an old-fashioned virtuoso career.

It was expected that I would play four or five different programmes in one city, so it was amazing what I had to have ready. I remember I heard Vasa Prihoda practising Paganini’s ’Nel core piu non mi sento’ in Helsinki. Oh boy! I hated to play that piece, but I played it night after night. One significant problem was that, at that early age, I didn’t have the stamina to meet all the demands of this repertoire. But my parents were romantics. They believed in me. And I’d be in the back room looking at the music, trying to remember the piece I was playing at the moment. The nerves involved in this!

I learned how to mesmerize myself. When a difficult passage came, I would watch the clock or whatever was on the balcony in the concert hall. Day after day, I would come up to some passage that scared the daylights out of me. I’d get scared a page before I got to it! But a musician feels so high when a concert is a great success that such struggles could be forgotten for a time. That wonderful feeling quickly becomes a necessary part of life.

Eventually, however, my lifestyle got a little too hard. I’ll never forget an entire tour when I spent my time trying to practise separating my third and fourth fingers so that I could put my third finger down without using my fourth finger also. And at every concert I played, I tried to do it.  Finally, I succeeded.

During my early career, there were a few women instrumentalists who served as role models: Erica Morini, Ida Haendel, and Ginette Neveau. But my idol was Jascha Heifetz. And I still feel that he was a genius whose understanding of music was phenomenal. If you analyze his fingerings and bowings, you see that he understood so much of what was at work. Everything he did was planned. It was as if he were able to mentally enlarge a piece of music so that he could analyze every part of it. He had a vision, genius.

And of course, in the old days, everyone said, ‘Well, I like Heifetz, but Kreisler is the real musician.’ And that was stupid. The kind of sound Heifetz had was that human voice in all of us. No matter what instrument you play, you have to be the kind of actor who can be involved in each phrase, each note in a measure and the movement of that note.

It’s how that note relates to a human situation, a thought. A musician makes tangible human thought or emotion. And the emotion is a clear picture of a state of mind.

I just deplore the fact that violinists have motions that are connected to bowing. And this is allowed because it makes it look like the player is working hard. What is hard is to teach a player to move with the phrase and put the various movements into the phrases. One should be able to make almost any sound first—without a physical manifestation of an emotion. Then one adds emotions. The most amazing part is that you don’t need to plan your motions to express emotions; awareness of the body can communicate anything. You want to perform like a dancer. It is our art.

It is not possible to teach all this within the traditional academic structure. A student’s anxiety about getting a job closes off the possibility to teach these ideas, and yet this is the most vital thing to learn. Anything that will awaken excitement of something greater than mankind, of spirituality, is frequently written off in our society. The world does not communicate. But as musicians we have the ability to communicate this spirituality to an audience. We may have to choose shorter pieces to do it, but it can be done.

We need something that is going to bring us hope. All music can accomplish this. The greatest of pieces are those that say, ‘Yes, this is terrible, but there is hope.’ There is so much suffering, but we can transcend such heights.

When I see an artist who seems filled with conflict, though I may admire the technical expertise, I see that person has not been awakened. By that I mean that somewhere in the past, that artist hasn’t learned why they are playing the violin, for instance. Because that artist has a chance to share not only an insight but to move closer to the great infinite mind from which great music comes.

With all this in mind, I would say that the ideal concert programme gives the audience the proudest spectrum of emotions possible, as in the days of programs designed in the ‘grand manner.’ An audience wants to have a tingle, an uplift, a laugh.

As for my plans for the future, I suppose the violinist in me would say that I will try to plan a schedule that will give me an opportunity to play. The human being in me might say that it is not so important that I play but that I continue to grow as an individual. All the things I could do—like teaching or lecturing—are terribly grey shadows of a much richer experience: Performing.

I will do more of it.

Louise Cavanaugh Sciannameo is Assistant Provost for Strategic Communications at the University of Pittsburgh. Prior to that role, she served as Vice President for Public Affairs at the Pittsburgh Symphony Orchestra.