Cellist Jeffrey Solow spent five remarkable years in the elite cello class of Gregor Piatigorsky at the University of Southern California. Here he remembers lessons with the great master 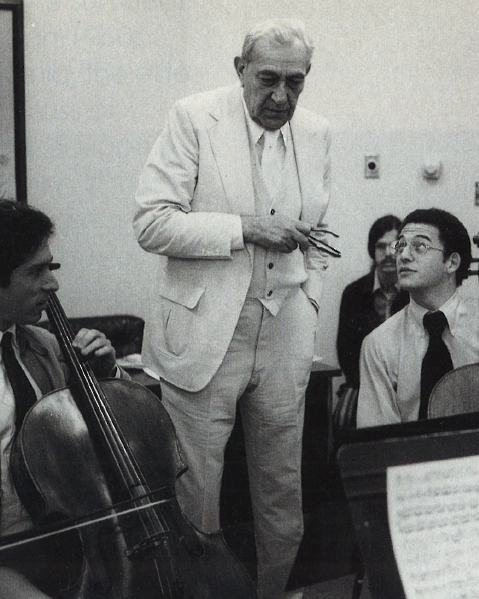 Piatigorsky always taught in a masterclass because he knew from his own experience as a member of Julius Klengel's class in Leipzig how effective and efficient this method of teaching was. He wanted his students to help and learn from each other, and by the time someone started a new piece it was likely that he or she had already heard other students' lessons on it and perhaps even played it for them. Piatigorsky strongly encouraged us to find out what was to be performed in each class and bring our copy of the music and make notes, so he didn't have to repeat things over and over. He was consistently supportive, kind, generous and often very entertaining, He held that we were not his pupils, a word he disliked, but that he was an older, more experienced colleague and together we were all 'students of art'.

The year before I joined, Piatigorsky had considered retiring from teaching and he had greatly reduced the class size, so in 1968 there were only two continuing students, Nathaniel Rosen and Myung Wha Chung. Over the next few years the class grew until it usually had about eight members (including at various times Raphael Wallfisch, Paul Tobias, Godfried Hoogeveen, Terry King, Emanuel Gruber, Susan Moses, Denis Brott, Leopoldo Tellez, Karen Buranskas, Elémer Lavotha, Peter Rejto and Mischa Maisky). Laurence Lesser, Piatigorsky's teaching assistant, worked with newer students on specific technical issues and would sometimes hear repertoire before it was brought to class. There was also always a class pianist, first Gerald Robbins and then Doris Stevenson.

Piatigorsky wanted the men to wear a jacket and tie to class, ostensibly because in concert we perform in these restrictive clothes. But I think he felt that, more importantly, if we had to dress up for class we would take it more seriously and learn better. The student whose turn it was to play sat in the 'hot seat' in the middle of the room while Piatigorsky sat behind a small table with the score and a pencil. The rest of us would be scattered around the sides of the room (with packed lunches!). He never brought his cello but instead would demonstrate things on the students' instruments. He liked us 10 watch his playing carefully from all angles and we learnt a lot from hearing how our cellos could really sound. Those who were ready to do so moved rapidly through repertoire, but sometimes he would have a student work on the same piece for a very long time. I studied the Davidov Concerto no.2 for almost my entire first year in the class.

Famous as a raconteur, Piatigorsky didn't disappoint us. He had an inexhaustible fund of anecdotes, which he told with great animation and charm in his personal and unmistakable Russian-accented English. Some of his stories were merely humorous but most had some musical or professional point. His creative mind came up with multitudes of wonderful descriptions: he knew how to find just the right word or turn of phrase. Evaluating a prospective instrument: 'You know, Jeffrey, this is first-rate second-rate cello': telling a Heifetz story: '...and he looked down with his gefilte fish face and said...'; expressing his philosophy of music: 'There are two kinds of music: music that is better than you are and music that you can play better than it is'. After Lesser and Michael (not-yet-Tilson) Thomas attempted to resurrect the almost never performed Concertino by Roussel, Piatigorsky remarked: 'You know Larry, there are some pieces... (pauses, turns several pages)... is like doctor trying to revive a corpse.' And in a similar vein: 'Practising before the concert is like breathing exercises for a dying man!'

Piatigorsky felt that personal expression was crucial both in playing and in learning to play: 'First you must have something to say, then you will develop the technique to say it. He appreciated and cultivated virtuosity but eschewed thinking of technique as merely a collection of gadgets. To him it was 'the ability to express what you want to say on the cello' and included controlling a large palette of instrumental colours, inflections, nuances, articulations, glissandos and dynamics. In fact, to Piatigorsky, music and technique were inseparable. His goal was to transcend the cello and communicate through it to the audience, and he wanted to teach his students to do the same. The greatest musical sin was to be boring.

Piatigorsky also emphasised the importance of tone. I remember him quoting Toscanini as to the three most important attributes a singer must possess: 'Voce, voce, voce.' When he was the newly appointed principal cellist of the Berlin Philharmonic under Fürtwangler, he had practised for hours a solo, which was only one long note, until he was able to produce the most beautiful sound he could imagine. That single note, he said, created such an impression in the orchestra and the audience that, in a way, his career began from it. (Piatigorsky had a very expressive but very fast vibrato. When I listen to his recordings now, especially the early ones, I always have to get used to it anew but then find it unique and beautiful.)

The great Russian bass Feodor Chaliapin, with whom the young Piatigorsky had toured as the entr'acte for Chaliapin's recitals, taught him one of the most important things he ever learnt: 'Grisha, you sing too much on the cello. You must learn to speok on the cello'. This led Piatigorsky to the understanding of real bow technique - in particular the use of the vertical aspect of the bow and not just the horizontal. 'Your thoughts are your vibrato,'he said, The bow is your tongue.' He taught us to flex the stick into the string to shape notes and phrases (referring to Kreisler's bow technique in this regard) and also stressed lifting the bow off the string, which he felt many cellists couldn't or didn't do well.

It may be surprising to those who think of Piatigorsky as the great Romanic cellist that he emphasised musical discipline. He often admonished us to have the character not to do something we were inclined to do musically or cellistically ('l have this pencil but I don't eat it!'). He was the first teacher I had who even mentioned getting a good edition, let alone insisted on it. The most frequent words I heard him say in class were, 'Read the music! What did the composer put there?' But he didn't want us just to follow the letter of the text, he wanted us to read between the notes and find the composer's real meaning. For example, he pointed out that there are many kinds of accents, even though they all look the same on paper, and each must be played differently to express different things. He often railed against 'dot-itis'- the disease of playing a note short because it has a dot over it - and explained that a dot doesn't mean short, it means putting a space after a note, before it or both. We had to think about why the composer put that dot there and how to play it so it conveyed their intention. The other 'disease' he warned us against was 'black note disease'- rushing through fast pieces or fast passages.

Heifetz's class met just down the hall and he was an occasional visitor to ours. The two masters employed very different teaching styles. Heifetz was rather a Zen master who would often make pronouncements that sounded like Zen koans and would perhaps only be fully understood years later. For example, after a student's performance failed to convince him: 'Do you like this piece? It doesn't like you!' Contrast this with his comment to me after I played the Boccherini G major Concerto with an eye to authentic performance practice: 'Do you like this piece? It doesn't sound like it'

Piatigorsky hardly ever gave his students bowings and fingerings. He allowed us to, or rather made us, think up our own. A frequent assignment was to find all the possible fingerings for a given passage so we could discuss the merits and drawbacks of each. In general he encouraged us to stay on one string and change positions rather than stay in one position and change strings (an example of the Russian School versus the Franco-Belgian or the German School). This preserves the colour and the line, and if the string in question is the A string it also produces greater sonority. He wanted us to seek out opportunities for instrumental creativity in the music rather than just protect ourselves from danger; 'safety first' was not his motto. He fell it was better to take a risk for a higher musical goal than simply be secure and in so doing guarantee a lesser result - although he never wanted us to choose a fingering that was musical but suicidal!

Piatigorsky always knew when to be practical and often spoke of the importance of being 'normal' as a cellist and musician. If a student were entering a competition with the Dvořák Concerto, for instance, he advised him or her not to play the original version of certain passages as he had advocated in class (Mischa Maisky has recorded the Dvořák with many of these original passages) because it might cause the judges to question their ability to play the standard version and hurt their chances of winning. (Piatigorsky encouraged many of his students to enter competitions, but as he grew older he was less and less a fan of such events, saying they were suitable for sports but not for art.)

As an artist Piatigorsky holds a similar position in the world of the cello as does Kreisler for the violin: although he had a brilliant technique he was more interested in communication than in mechanical perfection. While he acknowledged the importance of perfect intonation ('Every idiot can hear it if you play out of tune') he got bored practising solely for that end, and probably for that reason his own intonation was not always pristine. Pialigorsky felt that if a cellist had a healthy and natural technique he or she shouldn't have to spend too much time working on sterile instrumental mechanics. His favourite analogy went something like: 'lf you know how to drive correctly you don't have to learn over and over again in each new city. You just look at a map and you can go wherever you want.' He always wanted us to find music in everything we played - even scales.

From the January 2000 issue of The Strad