7 tips for classical violinists to unlock their inner fiddler 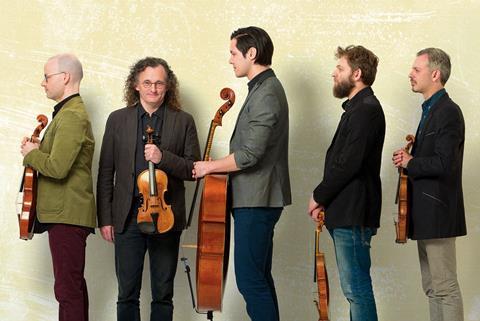 We’ve been fortunate in Brooklyn Rider to have worked with many masters of traditional music from around the world over the years: Bela Fleck, Rhiannon Giddens, Martin Hayes, Kayhan Kalhor and Abigail Washburn are just a few that come to mind. There’s so much to learn from deeply rooted traditions, in terms of inflection, storytelling, imagination, tapping into states of mind, archetypal human emotions and conveying deep meaning within seemingly simple means – simple on the surface, but then you peel away a few layers… I believe it was Bartok who was quoted as saying that a folk tune is as perfected an example of the musical art as a Mozart sonata.

While working on our latest album with the great Irish fiddler Martin Hayes, The Butterfly, I tried to take inventory of some the things we’ve learned from him over the years. Please forgive the generalizations that follow here, both about ‘folk’ music and ‘classical’ music – both impossibly broad subjects/ecosystems that also are more interdependent than we often think.

Obviously, the problem with saying ‘folk’ as a general concept is that it is an impossibly large umbrella to describe a world with as many variations in style as there are languages, dialects and specific accents within languages. So for the purposes of this article, I will generalize ‘folk’ music in this context to mostly refer to Celtic and North American fiddling traditions, though some of these things I feel are applicable to things as diverse as Chinese or Persian folk music, the music of the Roma people, etc.

Sadly, like many languages and species of animals around the world, many folk traditions around the world are being lost to urbanization, modernization, globalization, etc. The flip side is that those same forces have allowed more of us to know more about a greater diversity of folk music than at any other time.

Probably the fastest way inside a tradition is to learn ten tunes or so (a combination of dances and songs) by ear from either a live human being or recording/video. And not just learn them, but try to listen carefully for every inflection: bow usage, fingering, rhythmic feel, ornamentation, etc and copy as closely as possible the original. I think in today’s world there’s sometimes a stigma that says copying is not good or it robs one of individuality, but when setting out on this kind of learning journey, it’s best to do as we all did learning language as kids: listen and copy.

Perhaps the single biggest leap a classical player needs to make is to recalibrate the notion of bowing. Of course this would be an overly simplistic assessment, but for the purposes of this discourse I would say that the classical training generally emphasizes a large, sustained singing tone with smooth bow changes. This is considered one of the central values of good string playing. Part of how we got here is that as concert halls got larger, the value of detailed inflection has been downgraded.

Working with Martin, we’ve observed how incredibly detailed and nuanced the storytelling is, whether in tunes that are singing or dancing. All this good stuff takes place within a tiny bit of real estate on the bow (often just an inch or two). With dance tunes, the slurring provides all the fun, all the syncopated feeling against the steady beat (see Anner Bylsma’s Bach the Fencing Master for how that plays out in Bach’s Suites).

It is important to figure out what notes get the emphasis based on the feel of the tune, and which ones can be dropped/deemphasized. That’s where the swing comes from, which can be hard to do after years of classical training focused on evenness in inflection from one note to the next. Similarly, in slow airs, the emphasis is on a certain spoken quality, that this is music that exists to tell you something personal, intimate and immediate rather than to spin out long lines and melismas and create grand architecture (again see Bylsma’s book for similar themes).

The key is to find the ‘blue notes’ and to start exploring how to emphasize or de-emphasize them to help bring out the character of the tune. (Martin is a master of this.) All of this happens with the bow.

Like using indiscriminate large bows for sound projection, vibrato in the western classical world (both for singers and instrumentalists) has gotten bigger and wider with less subtlety over the last 150 years (check recorded history for verification, from players like Arnold Rose, Joachim, Ysaÿe through Busch, Kreisler and Heifetz to many of today’s players.)

In folk music, vibrato remains a tool that is indeed there for expression and color, but almost more as ornament and special effect rather than a constant thing. In some fiddlers of Roma (‘gypsy’) background it’s hard to tell if a note is being vibrated or trilled. (Of course there would have been many differences between classical and folk worlds in Joachim’s day, but check out his quote about vibrato usage: ‘Only use the Vibrato when you wish to lay particular stress on a note, which your feeling will suggest.’ Perhaps things were closer together back in the 19th century?)

So, little to no vibrato (particularly in dance tunes) is a good starting place. Once again, listening to many different players, copying them exactly and really noticing how they use (or don’t use) vibrato can be instructive. And there’s a whole world between literally a straight tone and very little vibrato that is fertile ground unexplored by most contemporary classical players. Also, in general, favor fingerings that stay in first position and use lots of open strings. This tends to be more in style than sul una corda fanciness. Which leads us too…

So much of folk music around the world involves drones (and not the flying kind – though when things are really ringing together you can feel like you are flying). So, a general rule is: the more open strings and drones one can use to create sympathetic resonance the better. In the place of large-scale/architectural harmonic development, drones keep you afloat, in a suspended state of wonder.

In many ways, this is the hardest thing to grab onto at first. In many folk traditions, ornamentation is as intricate as the finest carpet or mosaic design, and the untrained ear can get lost in the flurry of notes. Again, I encourage you to just listen over and over to a tune and attempt to mimic exactly what the person is doing. I’m always in awe of how Martin accomplishes this with a combination of left hand trills, turns, and shakes but in fast dance tunes often it is also the bow doing the triplet-ornament thing.

This all happens so fast it’s hard to tell whether it’s the bow or left hand that’s making the ornament. Work in progress for me! (Incidentally, there are computer programs that can slow down a recording so you can hear exactly what an ornament is doing.)

I remember being reprimanded numerous times in classical chamber music coachings growing up for tapping my feet or counting out the beginning of a piece or phrase in rehearsal. Playing with Martin is like playing with a fiddler and a percussionist/tap dancer at the same time. His feet are ALWAYS going in any dance tune.

It almost seems as if the body below the waist is a drummer beating its own inevitable beat, and because that is such a solid rhythmic base, there is subtle freedom with the bow and fiddle that keep his groove so alive. So, if it’s any kind of dance tune, become a dancer and get those feet moving!

Speaking of dancers, watching the way the they move their body and embody the music can be instructive in terms of learning feel. Similarly, it’s worth learning some tunes from a recording of a singer as well as from an instrumentalist. In most folk music, the connection between instrumental and voice is much closer and more detailed than the relationship contemporary classical players have with vocal music. (i.e. the technical demands that have extended what string instruments do in terms of range, color, speed, etc have grown further apart from what the human voice can produce.) 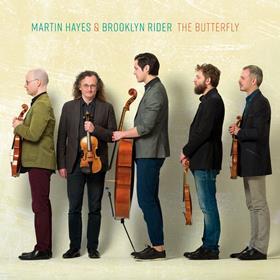 Brooklyn Rider’s latest album The Butterfly is a collaboration with the Irish fiddle legend Martin Hayes, featuring Irish traditional tunes framed in new arrangements. It is available now from In A Circle Records, on Spotify and iTunes