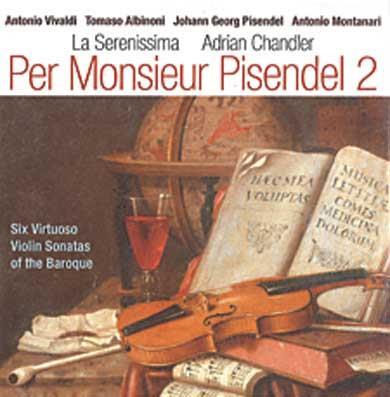 United by the music’s association with Johann Pisendel, this follow-up to La Serenissima’s first volume from over a decade ago (reviewed June 2003) presents Baroque violin virtuosity with aplomb. The performance of Pisendel’s own Solo Sonata in A minor testifies not only to his compositional talents, but also to Adrian Chandler’s lithe and superbly accurate playing, with declamatory spontaneity and technical control perfectly judged in the distinctive finale. The same might be said of Pisendel’s accompanied Sonata in C minor, noteworthy for its experimental technical and tonal language (attributes shared by Montanari’s Sonata) and here displaying sensitive accompaniment by other members of La Serenissima.

Albinoni’s B flat major Sonata, too, receives a distinguished reading, and the two Vivaldi sonatas create a suitable context given La Serenissima’s Vivaldi specialism. The A major Sonata gets the disc off to a good start with beautiful double-stopping in the opening Andante, a vivacious Allegro, soulful Largo and fun finale. The F major Sonata that closes the disc is perhaps less interesting, barring the finale in which all players enter into a seemingly spontaneous build-up of fervour.

Avie’s recording is commendably clear, with a good balance between ambience and detail. My only criticism is that a slightly more varied performance approach would have been welcome, but this is a minor caveat in an excellently recorded and performed disc.