Under the direction of the husband-and-wife team, the festival is set to return with a series of live concerts 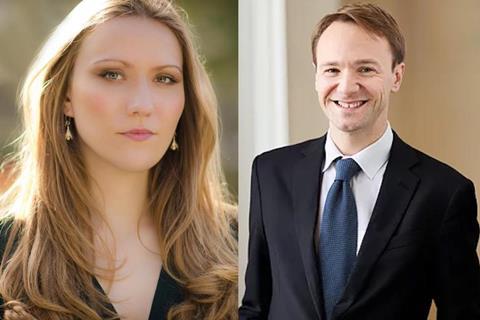 The violist Rosalind Ventris and her husband, the conductor and musicologist Joseph Fort, have been announced as the new Artistic Directors of the Cowbridge Music Festival.

The festival, based in the Welsh market town of Cowbridge, offers a mixture of classical, folk, jazz and other musical genres. Under the direction of the husband-and-wife team, it is set to return this year with a series of live concerts. Should restrictions continue further, the Festival has planned a set of measures to provide a safe event.

Ventris, who has performed at the festival several times, performs widely as a soloist and chamber musician collaborating with artists such as Cowbridge Music Festival Patron violinist Nicola Benedetti, pianist Mitsuko Uchida, cellist Sheku Kanneh-Mason, the Belgian National Orchestra and actor Simon Russell Beale. Some highlights over the past few months include concerts at the Wigmore Hall with the Kaleidoscope Chamber Collective, and recording her debut solo CD of music by female composers. As the violist of Trio Anima, Ventris will be shortly recording a disc featuring Welsh music for Tŷ Cerdd. She also teaches the viola at the Royal Irish Academy of Music.

Fort is a conductor and musicologist based at King’s College London. At King’s, Fort directs the Choir, broadcasting on Radio 3 and recording for Delphian Records, and he lectures in the Music Department, where he is the Director of Performance. He completed his PhD at Harvard University, and previously studied at Emmanuel College, Cambridge and the Royal Academy of Music, who in 2017 elected him to their Associateship. His research focuses on eighteenth-century music, and he is currently completing a new book on Haydn and the minuet. He is also devoted to public musicology, and gives numerous talks aimed at enhancing audience members’ appreciation of the repertoire, for festivals and concert venues.

Founder and former Artistic Director Mary Elliott-Rose will remain closely involved with the Festival as its Chair of the Board of Trustees. She comments: ‘As hard as it is to step aside as Artistic Director from this role that I have loved and cherished for the last decade, I do so knowing that the Festival is now in the best possible hands. After this particularly difficult year, we are beyond excited to finally be able to start dreaming again about the possibility of live events, and to see where Rosalind and Joseph’s impressive artistic vision takes us. They are already working incredibly hard on ensuring that the 2021 Festival brings hope and joy to as many people as possible in the Cowbridge community and beyond!’

Ventris and Fort write: ‘We are absolutely thrilled to be joining the wonderful team of the Cowbridge Music Festival. Having played at the Festival several times, Rosalind knows only too well what a special place Cowbridge is, and just how unique the Festival is—the warmth of everyone involved, the openness to all, and the commitment to the highest artistic standards. We are very excited to be welcoming artists and audiences to this beautiful market town in the future. We are working closely with the team to bring world-class musicians to Cowbridge later this year, and look forward to getting to know the whole community really well over the coming months. This year’s edition will place the local Cowbridge community at the heart of the Festival’s programme and we can’t wait to share our plans with you shortly. The success that Mary, Andrew and the team have achieved over the last ten years really is remarkable, and it is an honour and a joy to be trusted with carrying the Festival into its next decade.’

More information about the Cowbridge Music Festival can be found at https://cowbridgemusicfestival.co.uk/. A further announcement regarding the 2021 Festival programme and Fringe will be made soon.