The Latvian violinist joins the roster for general management 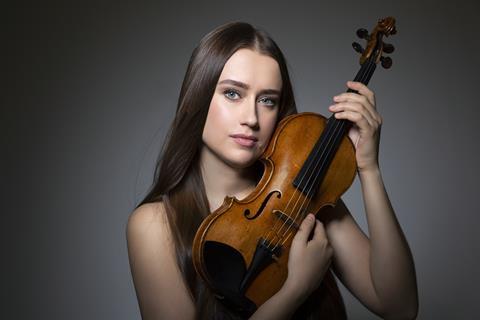 A graduate of the Royal Academy of Music and the Hochschule für Musik Hanns Eisler, Latvian violinist Kristīne Balanas was a Laureate in the 66th International ARD Music Competition, a  2018 Young Artist of the Year in the Grand Music Awards Latvia, and a Fundación Excelentia Young Talent Award winner.

Balanas has performed as a soloist with some of the world’s leading orchestras, including the London Philharmonic, Bavarian Radio Symphony Orchestra and the Orchestre de Chambre de Paris, and has made guest appearances at the Berliner Philharmonie, Southbank Centre, and Carnegie Hall.

She has performed on BBC Radio 3’s In Tune and The One Show on BBC One, and given recitals at the Purcell Room, Barbican Hall and Kings Place. She performs regularly with her sister, cellist Margarita Balanas.

Balanas performs on a 1787 Antonio Gragnani violin, loaned to her by ‘’The Little Butterfly Foundation’.