The founding first violinist of the St. Lawrence String Quartet died after a battle with cancer 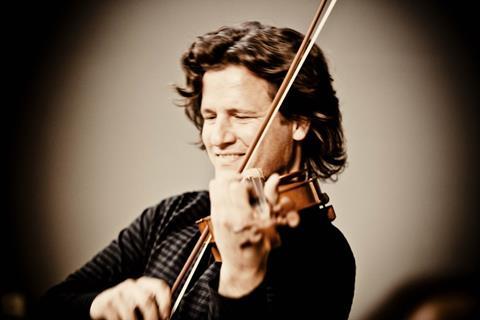 In a joint statement, SLSQ members Owen Dalby, Lesley Robertson, Christopher Costanza said: ’Geoff was an inspired artist whose loyalty to his chosen passions and people was legendary. He fought cancer as he lived his life, brimming with optimism and tirelessly showing up for the things he loved the most: spending time with Livia and playing sports with his boys.’

From 2009 until his passing, he was the director of chamber music at the Spoleto Festival USA in Charleston, SC, where he brought together many chamber musicians with spontaneous collaborations, and was known for delighting audiences with his engaging, warm and insightful introductions.

’Geoff had an energetic and spiritual connection to music that rubbed off on anyone lucky enough to witness him play,’ the quartet’s statement continues. ’He constantly inspired us to heights we never dreamed of. We will miss him every single day, but feel immensely grateful to have been his fellow traveler.’

Nuttall is survived by his wife, violinist Livia Sohn, and their children Jack and Ellis.

The family and quartet have set up The Geoff Nuttall Memorial Fund to advance cancer research at Stanford University and have asked people to consider donations in lieu of sending flowers. More information can be found at memorial.stanford.edu.