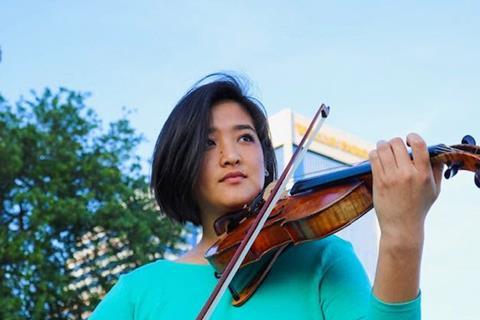 The Los Angeles Philharmonic Association has announced that 24-year-old violinist Gabriela Peña-Kim has been selected for the LA Phil Resident Fellows programme.

Launched during the 2018/19 season, the programme is the centerpiece initiative of the LA Phil’s Centennial, with the purpose of helping to promote greater diversity in orchestras.

It caters to up-and-coming symphonic musicians representing or serving historically underrepresented populations, its goal being to prepare these musicians to compete for positions in major professional orchestras.

Born to a Honduran father and a South Korean mother, Peña-Kim graduated from the Jacobs School of Music at Indiana University, where she studied with Alexander Kerr, concertmaster of Dallas Symphony.

Her main focus has been orchestral playing, attending numerous music festivals, including the Music Academy of the West, Pacific Music Festival, Schleswig-Holstein Musik Festival, and the Aspen Music Festival.

She has worked under conductors including Alan Gilbert, Larry Rachleff, Valery Gergiev, Christoph Eschenbach, and Robert Spano, and for the past two years, has been playing with the Jacksonville Symphony under music director Courtney Lewis.

Along with being a part of the St. Augustine Music Festival for the past eight years, performing with the Diaz Trio, as well as leading the chamber orchestra, she is also involved in managing the festival with her parents, the founders.

Up to five Resident Fellows are appointed for the LA Philharmonic programme through a screening and audition process led by musicians from the ensemble and LA Phil Music & Artistic Director Gustavo Dudamel.

While on the programme, they play with members of the orchestra for up to three years, focusing on their artistic development through orchestral and chamber music, new music, and education concerts performed at Walt Disney Concert Hall, the Hollywood Bowl, and in community settings.

Resident Fellows also have the opportunity to participate in tours with the LA Phil, and receive mentorship from LA Phil musicians, as well as assistance with audition preparation.

In May 2018, the LA Phil announced its first cohort of four Resident Fellows: Andrew François (viola), Michael Fuller (bass), Eduardo Rios (violin), and Wesley Sumpter (percussion). Since then, François has won a position with the St. Louis Symphony.

Applications for a Resident Fellow Viola position are currently open, and auditions will take place in July 2019.

More information about LA Phil Resident Fellows can be found at laphil.com.