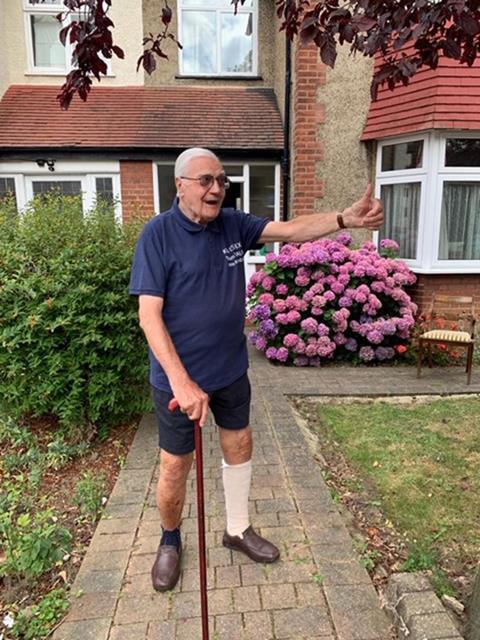 Kenneth Essex nearing the end of his 10km walk

A London violist who performed on the Beatles track Yesterday has raised more than £16,000 for charity by walking 10 kilometres just before celebrating his 100th birthday. Kenneth Essex, a veteran of the Second World War, is now aiming to bring the total raised for Moorfields Eye Hospital up to £20,000.

In a career lasting almost 60 years, Essex performed with the London Philharmonic, Royal Philharmonic and London Symphony orchestras, and at Glyndebourne. As well as performing on Yesterday, he played in the string quartets that recorded the music for Fawlty Towers and played a viola solo in the title music of the film The French Lieutenant’s Woman. Before that, he spent six years in the Royal Navy during the war, serving on HMS Euryalus and HMS Belfast.

Essex’s challenge has been featured on ITV London News, Virgin Radio, and in The Times and the local Ham & High newspaper. He decided to raise money for the Islington hospital after having treatment there for macular degeneration in both eyes. ’The treatment I have received has been exceptional, especially at this difficult time,’ he said. He had originally aimed to raise £1,000 for the hospital, but the support he received made him increase the target to £2,500, then £5,000, then £10,000, then £15,000. Although he completed the challenge on 19 July, donations are still coming in and he eventually hopes to reach £20,000. He turned 100 on 20 July.