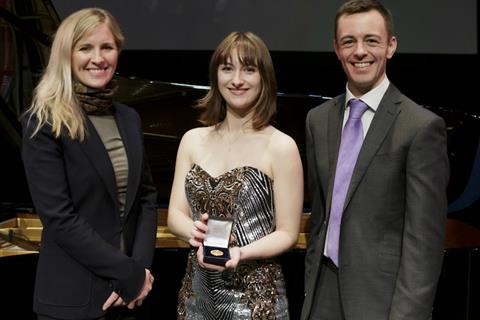 Following a showcase at the Southbank Centre’s Purcell Room in London, Elena Abad has been announced as the winner of Trinity Laban’s Gold Medal.

Her performance, which included Fritz Kreisler’s colourful Recitativo and Scherzo, Op. 6 and her own solo violin of arrangement of Freddie Mercury’s iconic Bohemian Rhapsody, also won her the newly introduced Audience Prize.

The annual Gold Medal Showcase celebrates outstanding young Trinity Laban musicians. Competitors are nominated by the Heads of each of Departments within Trinity Laban’s Faculty of Music for their exceptional musical flair and professionalism, and all receive a Trinity Laban Director’s Prize for Achievement in recognition of this.

This year’s edition saw seven students and recent alumni compete for the Gold Medal with a mix of classical, contemporary, jazz and musical theatre.

Balsom commented ‘What an honour to experience such a wonderful Southbank Centre concert – I almost forgot this was a competition. This was a staggeringly diverse evening of music with clever and creative programming. I don’t think I’ve been to anything quite like this. How incredible people are when they do their job brilliantly.’