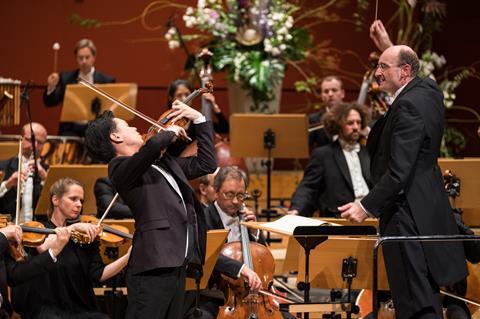 Timothy Chooi performs the Tchaikovsky Violin Concrto in the final round, with Andrew Manze conducting the NDR Radio Philharmonic Orchestra

Timothy Chooi has won the Joseph Joachim International Violin Competition in Hannover, Germany. The 24-year-old Canadian receives €50,000 and the three-year loan of a c.1765 Guadagnini violin, as well as concert engagements and a CD recording with Naxos. Currently completing a master’s degree with Catherine Cho at the Juilliard School, Chooi is a former student at the Curtis Institute of Music, and has studied with Pinchas Zukerman, Ida Kavafian and Patinka Kopec. Earlier this year he received the Verbier Festival Academy’s Yves Paternot Award, worth c.$10,000, and has also won prizes at the 2014 Menuhin and 2015 Michael Hill competitions.

Second prize and €30,000 went to 19-year-old Dmytro Udovychenko. The Ukrainian, who is currently studying with professor Boris Garlitsky at the Folkwang Universität der Künste in Essen, Germany, also received the audience prize and the JJV Community award, each worth €2,000. Udovychenko’s previous awards include the Grand Prix at the 2016 Leonid Kogan Violin and Cello Competition in Brussels, and second prize at the 2017 International Jascha Heifetz Competition for Violinists in Vilnius.

In the final round, each candidate was required to perform a full violin concerto with the NDR Radio Philharmonic Orchestra conducted by Andrew Manze.

The six finalists’ choices were: