Why is it that so many of the great luthier’s violins don’t fit the moulds we have for them? 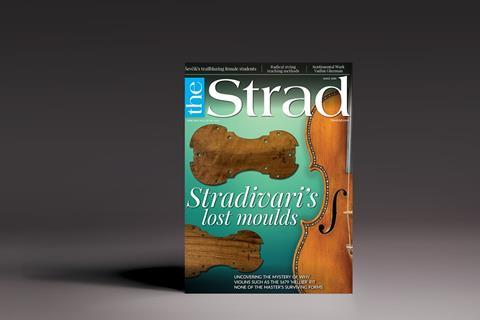 Violins such as the 1679 ‘Hellier’ fit none of the master’s surviving forms. In the June 2019 issue of The Strad, Andrea Zanrè and Philip Ihle conclude their examination of Stradivari’s moulds, with the aid of micro-CT imaging by Rudolf Hopfner, by exploring whether the Cremonese master may have used more than the twelve forms that survive in the Museo del Violino.

Donald Weilerstein, Natasha Brofsky and Ali Kian Yazdanfar join us for a discussion about experimental teaching methods; in our Session Report we join violinist and conductor Thomas Zehetmair in the studio for the Orchestre d’Auvergne’s own-label recording of Haydn, Strauss and Bruckner; plus we learn about the renowned Czech pedagogue Ševčík’s female pupils, at least three of whom went on to star careers. We also include a report from the Carl Nielsen International Violin Competition in Odense.

We examine bow chamfers through the ages, taking bows from the Baroque era to the present day to show how these small details of a bow head have changed with the times.

In Focus features a c.1870 viola by Carl Mettus Weis; Christopher Thorp’s method for making a mould and rib structure in Trade Secrets; My Space features the workshop French luthier Charlélie Dauriat; and in Making Matters with understand the function of the violin string between the peg and fingerboard nut.

The bumper 144-page digital edition includes both the June issue and Accessories 2019. Extras include: