The Strad February 2019 issue is out now 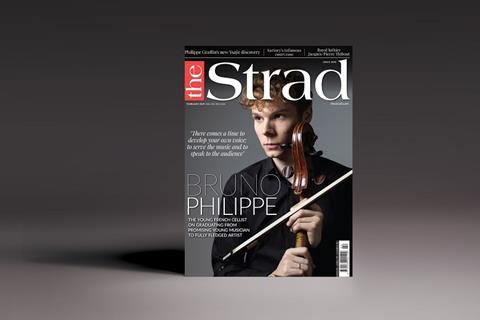 There’s a French focus to The Strad’s February 2019 issue, in which cover star Bruno Philippe discusses his progress from promising young musician to fully fledged artist. As he releases his first album as an official Harmonia Mundi cellist, he chats with us about the merits of gut strings, old instruments versus new ones, inspirational teachers, his public image – and leaving behind the competition circuit to focus on real life.

We learn about Jacques-Pierre Thibout, the most successful violin maker of his family, and examine the evolution of his style through ten instruments; and unearth the extraordinary story of Eugène Sartory’s long-running legal battle with a US dealer for selling imitations of his work.

Leila Josefowicz tells us about the myriad attractions of Bernd Alois Zimmermann’s 1950 Violin Concerto – music that defies categorisation. Philippe Graffin recounts how he chanced upon the original version of Ysaÿe’s Sixth Solo Violin Sonata; and Viktoria Elisabeth Kaunzner uses her eight years of experience teaching South Korean violinists to identify the trends that make them so successful in competitions.

In Focus features an 1893 violin by Gustave Bernardel; Nicolas Gilles details his intricate method for making oil varnish in Trade Secrets; My Space looks at the workshop of Noémie Viaud, a French luthier now living and working in Denmark; and in Making Matters we examine the unusual techniques of French violin maker Benoit Joseph Boussu.

Plus, in this month’s bumper digital edition: