The American violinist receives €25,000, a CD recording, a  number of important international performance opportunities and the loan of a Stradivarius 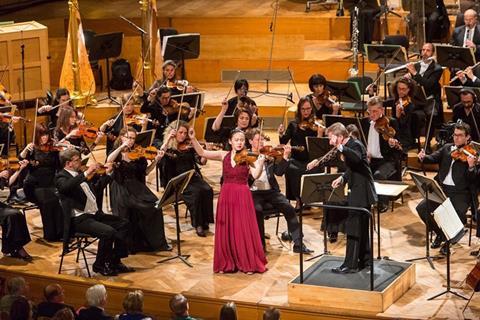 Following a final round on Saturday 25 May, in which candidates performed a concerto of their choice and Finnish composer Kimmo Hakola’s newly written Fidl op. 99, accompanied by the Belgian National Orchestra under Hugh Wolff, the Queen Elisabeth Violin Competition has awarded its first prize to Stella Chen.

The 26-year-old American violinist receives €25,000, a CD recording, a number of important international performance opportunities – plus the 4 year use of the 1708 Huggins Stradivarius violin, on loan from the Nippon Music Foundation.

The audience prize of (€2,500) went to Sylvia Huang, the only Belgian violinist in the Brussels-based competition.

Previously a pupil of Itzhak Perlman and Miriam Fried, Stella Chen now studies at The Juilliard School with Li Lin and Catherine Cho and at the New England Conservatory with Donald Weilerstein. She has won prizes at the Yehudi Menuhin Competition and the Tibor Varga Competition and was awarded the Robert Levin Prize. Chen has also studied psychology at Harvard University.

The inaugural QEMC in 1937 was devoted to the violin and dedicated to Eugène Ysaÿe, who had recently died. David Oistrakh, then aged 28, was the competition’s first winner. The first piano competition took place the year afterwards. Singing was added in 1988, and cello in 2017. There is also a composition competition, which is run outside of the four-year cycle.