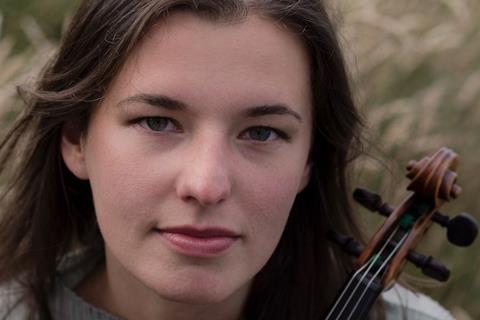 The Royal Northern Sinfonia has appointed Maria Włoszczowska as its new leader. The 29-year-old Polish violinist succeeds Bradley Creswick, who led the RNS for over 25 years.

Her first concert as official leader of the RNS will be the season-opening concert on Saturday 18 September at Sage Gateshead.

On Włoszczowska’s appointment, Abigail Pogson, Managing Director of Sage Gateshead said: ‘I am really thrilled that Maria is joining us as the next Leader of Royal Northern Sinfonia. She is an incredibly talented musician and leader who has already developed a strong relationship with the orchestra over her appearances this season. It is an exciting new era for Royal Northern Sinfonia with next generation leadership in Dinis and Maria. As we gradually move back towards live performances, I’m looking forward to hearing the many concerts and projects which Dinis, Maria and Royal Northern Sinfonia will create together in coming months and years.’

Włoszczowska said: ‘I am thrilled to be joining the wonderful RNS as Leader. I was immediately taken by the player’s openness, trust, willingness to explore and always go the extra mile – an attitude that creates endless potential and makes them a world-class ensemble. I’m delighted to be able to contribute to what is undoubtedly a very exciting future for the group. I’m also keen to get to know the audiences around the region and make this stunning part of the UK my home.’