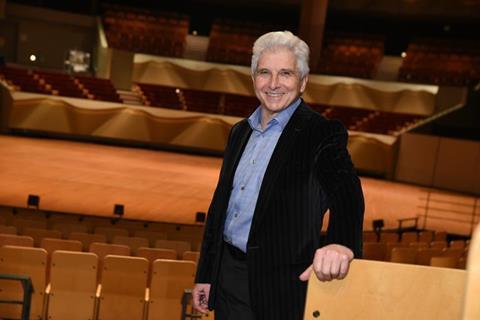 The Colorado Symphony Association (CSA) has announced the appointment of Peter Oundjian as principal conductor.

With a career spanning five decades, Oundjian began as a solo violinist and was first violinist of the Tokyo String Quartet for 14 years. He left the quartet to turn his energy towards conducting, embarking on an international conducting career leading orchestras worldwide. After a 14-year tenure as the music director of the Toronto Symphony Orchestra and six years at the helm of the Royal Scottish National Orchestra, Oundjian was named music director of the Colorado Music Festival in 2019 and continues in that role.

’I am thrilled to be joining the Colorado Symphony as principal conductor,’ said Oundjian, ’as I have always enjoyed working with this extraordinary orchestra. The level of musicianship and dedication among the players, and the organisation’s willingness to experiment, collaborate and push the boundaries of what an American orchestra can be, makes this a very exciting partnership.’

Oundjian has been a visiting professor at Yale University’s School of Music since 1981, and in 2013 was awarded the school’s Sanford Medal for Distinguished Service to Music. A dedicated educator, Oundjian conducted the Yale and Juilliard Symphony Orchestras and the New World Symphony during the 2018/19 season.

Oundjian was born in Toronto and raised in Surrey, England. He performed frequently as a violinist and choral singer, including in three recordings under the baton of Benjamin Britten. He attended the Royal College of Music in London where he was awarded the Tagore Gold Medal in 1975, presented to him by Queen Elizabeth The Queen Mother.

He went on to study at the Juilliard School under Ivan Galamian, Itzhak Perlman, and Dorothy DeLay. In 1980, Oundjian won First Prize in the Viña del Mar International Violin Competition, as well as the Pro Musicis Award in New York, before joining the Tokyo String Quartet in 1981.

Watch: The Tokyo String Quartet plays the finale of Haydn’s op.77, no.1

Listen: The Strad Podcast Episode #24: Caroline Pether on the joy of playing in chamber orchestras