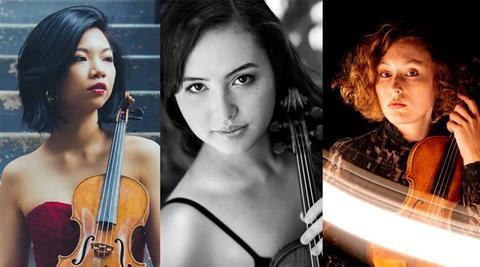 The New York Philharmonic has announced the appointment of three new violinists.

I-Jung Huang, Alina Kobialka and Audrey Wright will be joining for the 2022/23 season with the orchestra, marking the first appointments since the pandemic resulted in two years of disruption for the orchestra.

‘I’m so excited to be joining the violin section of the New York Philharmonic this season’, I-Jung Huang announced on her Instagram story.

Huang was previously a member of the first violin section for the St. Louis Symphony Orchestra which she joined in 2020. A multi-award-winning violinist, Huang won the 2017 Ima Hogg Concerto Competition and in 2015 was named laureate of the Michael Hill International Violin Competition.

Huang studied at the Manhattan School of Music, New England Conservatory, and The Juilliard School.

Alina Kobialka’s college, the Cleveland Institute of Music (CIM) took to social media to congratulate the violinist: ‘We are thrilled to congratulate CIM alumna Alina Kobialka (BM ’20, MM ’21, I. Kaler) on her appointment to the violin section of the world-renowned @nyphilharmonic! Alina is one of only three musicians to earn a spot in the Orchestra since the onset of the pandemic. Way to go, Alina!’

A post shared by Cleveland Institute of Music (@cimedu)

Kobialka has performed with various American orchestra, including the San Francisco Symphony and the Las Vegas Philharmonic. She won second prize at the 2017 Elmar Oliveira International Violin Competition, was named a laureate of the 2016 Irving M. Klein International Competition and was awarded the Grand Prize at the Mondavi Center National Young Artists Competition.