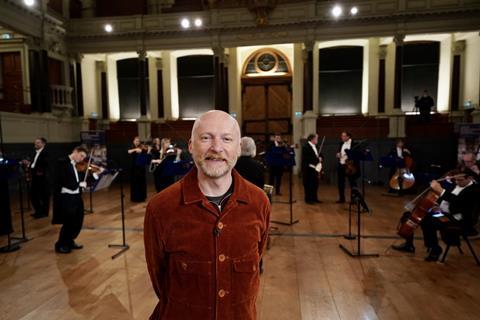 Marcus du Sautoy, University of Oxford Simonyi Professor for the Public Understanding of Science, with members of the Oxford Philharmonic Orchestra

Click here to watch the Oxford Philharmonic’s performance of music by Bach and Rameau, presented by Marcus du Sautoy, University of Oxford Simonyi Professor for the Public Understanding of Science

At the recent Oxford Philharmonic concert that I curated and presented, and is now available free to view, we were blessed with not one, not two but three Stradivari violins.

The concert explored the mathematics of the Baroque and beyond and featured music from two of the greats of the period: Rameau and Bach.

Both had a love of ideas mathematical and as Rameau once wrote: ‘Not withstanding all the experience I may have acquired in music from being associated with it for so long, I must confess that only with the aid of mathematics did my ideas become clear.’

The Bach Double Violin Concerto showed off the instruments in the concert: one of our soloists, Tamás András, was playing the ‘Circle’ Strad, which bears a fine and original label dated 1701. Its name refers to the mysterious compass arc scribed in the upper bout of the back. The reasoning behind the origin of this mark is still unknown.

Our other soloist Charlotte Scott, played the ‘Gagliano’ Strad, made in 1685, though with a front plate by another great Italian maker, Alessandro Gagliano.

The last piece in our concert, Bach’s Second Brandenburg Concerto, with soloist Alicja Smietana, provided the chance to hear our third Stradivari violin in action. The ‘Braga’, made between 1726 and 1728, is the only guitar-shaped Stradivari violin in existence. It is in an excellent state of preservation with extraordinary rich varnish.

But as a scientist I have always been intrigued to know: what makes these violins so special and why can’t we replicate Stradivari’s skills today?

An interesting hypothesis relates to a unique climate, known as the Maunder Minimum, that existed between 1645 and 1715. This was a period with reduced solar activity that led to lower temperatures, which in turn caused trees to grow more slowly, perhaps producing wood with the superior sound quality we assosciate with Stradivari. Such climatic conditions were unique to the time and have not occurred again since Stradivari’s ‘golden period’.

However, recent chemical analysis of Stradivari’s wood has thrown up an alternative suggestion that might actually be reproducible. Scientist have discovered that Stradivari treated his wood with complex preservatives containing aluminium, copper and zinc.

This type of chemical seasoning was an unusual practice that was unknown to later generations of violin makers. In its current state, the wood of Stradivari’s violins has very different chemical properties to that used by the maker’s modern counterparts. This analysis opens up the possibility of resurrecting the seasoning Stradivari used for our instruments in the 21st century.

One of the other striking questions about the violin is why the box should make so much difference. After all, isn’t it the strings that are vibrating? And why did violins end up as the strange shape we see today, rather than a simple rectangular box?

It wasn’t until the end of the 18th century that we really understood why shape was so important. It was the amazing experiments and performances of scientist Ernst Chladni that revealed that there is amazing symmetry hiding in the sound of things vibrating. 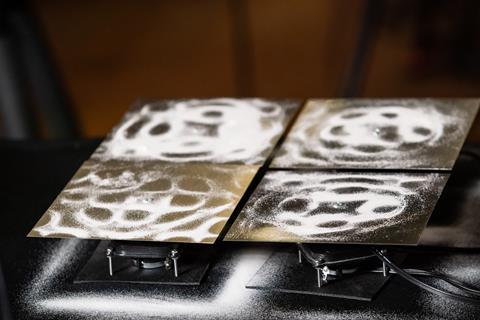 Chladni discovered that if he sprinkled sand on top of a square metal plate and vibrated the plate with a violin bow, he could set up the most extraordinary and unexpected symmetrical patterns in the sand.

His performances of these symmetries in sound were so popular that audiences across Europe flocked to witness the strange shifting shapes he could produce. Napoleon even rewarded him with a gift of 6,000 Francs. As part of our concert we decided to recreate Chladni’s wonderful experiment, not with just a single plate vibrating but a whole tessellation of them.

I have helped to set up a new centre at the Royal Northern College of Music in Manchester called PRiSM – Practice and Research in Science and Music – and together we are exploring the possibility of creating a new musical instrument that uses these plates to make a kind of sonic Alhambra.

The Chladni plates are a two-dimensional version of the one-dimensional harmonic series you generate with a vibrating string. When you vibrate them, sand collects at places that remain still and forms curves known as ‘nodes’. Differently shaped plates generate different patterns that appear at different frequencies, or ‘modes’.

So that is one reason why the shape of the violin matters. Each vibrating box has its own resonant frequencies, and it seems that Stradivari and his colleagues hit on the shape that helps the vibrating strings to sound as wonderful as they did in the Oxford Philharmonic’s performance.