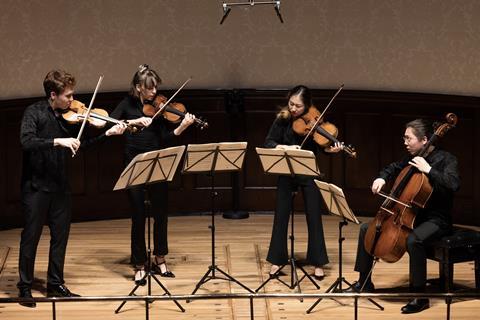 As first prize winners, the quartet will enjoy guaranteed performance and professional development opportunities, including a recital at Wigmore Hall,  residencies at Avaloch Farm Music Institute, Banff Centre for Arts and Creativity, plus places at McGill International String Quartet Academy 2022, ProQuartet Masterclasses, Britten Pears Young Artists Programme in Aldeburgh; as well as concerts promoted by the Esterházy Foundation in Eisenstadt  and the Leeds International Concert Season.

Formed in 2019, the quartet is formed of brothers Jonathan and Lukas Schwarz on first violin and cello, Amelie Wallner on second violin and Mayu Konoe on viola. They have recently been signed for general management with Impresariat Simmenauer.

John Gilhooly, Wigmore Hall director and chairman of the jury, said, ‘This past week had been an extraordinary celebration of the string quartet, witnessed both by our live audiences in London as well as the thousands of viewers around the world who watched the live stream.  The standard of playing fills us with great confidence for the future.’

The competition was initiated in 1979 when the then-unknown Takács Quartet claimed victory. Held every three years, the 2018 competition was won by the Esmé Quartet, with previous winners including the Van Kuijk, Arcadia and Danish Quartets.