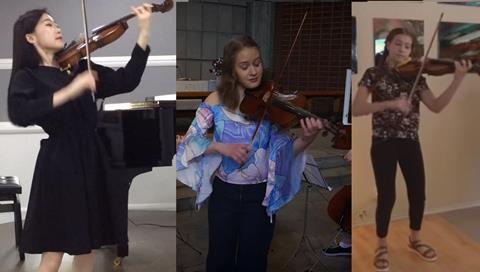 The finalists in the video submissions (left to right): Youngji Kim, Laura Kukkonen and Adriana Bec

Ray Chen and the Los Angeles Philharmonic have announced the three finalists of the ‘Play with Ray’ competition, which invited video submissions from non-professional violinists worldwide for a chance to perform Bach’s Double Concerto with Chen at the Hollywood Bowl.

The competition received more than 800 entries, and three have now been chosen by a panel of judges to travel to Los Angeles for the final stage. They will play alongside Chen in person on violins chosen by him from the Tarisio auction house vault.

The finalists will also attend masterclasses and concerts in the days leading up to the concert. The overall winner will join Chen and the LA Phil on stage at the Hollywood Bowl to perform the first movement of Bach’s Double Violin Concerto on 8 August 2019.

‘I want to provide people around the world a fun, once-in-a-lifetime opportunity,’ said Chen. ‘People who have a dream to perform on stage, this project is for you. I couldn’t think of a better partnership to help realize everyone’s passion for music than the LA Phil at the Hollywood Bowl.’

The three finalists’ video submissions can be viewed here: