Aged 14, 16 and 18, each will perform a concerto with the Cleveland Orchestra this Friday 26 July 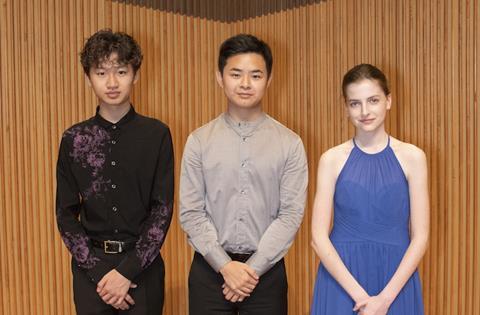 The Thomas & Evon Cooper International Competition last night named its three finalists who will each perform a concerto on Friday 26 July with the Cleveland Orchestra at Severance Hall.

The Cooper International Competition, presented annually by the Oberlin Conservatory of Music and the Cleveland Orchestra, alternating between piano and violin, has a prize pot of $40,000, of which $20,000 goes to the winner, $10,000 to second place and $5,000 to third, with $1,500 each for fourth to sixth positions, plus a $500 audience prize.

The event began life as the Oberlin International Festival in 1985 and, after a brief hiatus, returned in 2010 sponsored by Thomas and Evon Cooper.

The competition will be streamed live here