Swedish 16-year-old Johan Dalene picks up the $20,000 top prize with a performance of the Tchaikovsky Concerto 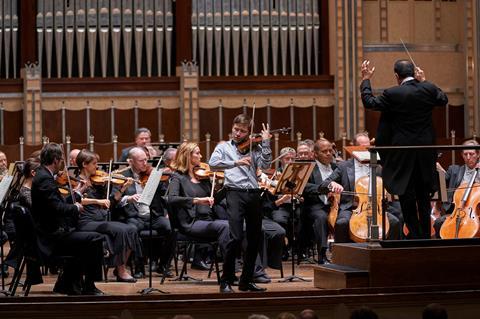 The competition, for musicians aged 13 to 18, takes place annually, alternating between piano and violin.

Gregory Fulkerson, chair of the jury and long-time professor at Oberlin, heaped praise on Dalene’s performance: ’I saw the best Tchaikovsky Concerto that I’ve ever heard,’ he said. ’I’ve been waiting 60 years to hear someone take the Tchaikovsky Concerto and understand the score so profoundly that he can take it to the world and interpret it in precisely the way the composer intended. It was simply spectacular.’

Dalene was born in Norrköping, Sweden, in 2000 and began violin lessons at the age of four. He made his debut as a soloist just three years later with the Norrköping Symphony Orchestra, and returned at the age of ten to perform Sarasate’s Zigeunerweisen.

He has won first prizes at the Stockholm International Music Competition, the Kocian Violin Competition (Czech Republic) and Giovani Talenti (Italy). In 2016 he won third prize in the junior section of the Menuhin Competition (held in London), as well as picking up the competition’s Chamber Music Award, Wieniawski Prize and ECMY Prize for Exceptional Performance.

He has been studing with Per Enoksson at the Royal College of Music in Stockholm since 2010.

See below for reports on earlier stages of the competition